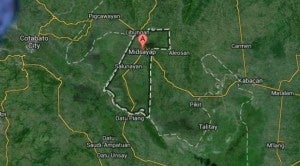 KIDAPAWAN CITY, Philippines—At least eight people were injured when a hand grenade exploded inside the public market in Midsayap, North Cotabato, as fishmongers and other vendors were preparing to go home Monday night, police said.

Senior Inspector Henry Narciso, the town’s deputy police chief, said witnesses saw one of two men on a motorcycle lobbing a fragmentation grenade at the fish stalls and leaving hurriedly.

The blast occurred during a power interruption around 8:40 p.m., Narciso said.

“The victims were market vendors closing shop at the time of the blast,” Narciso said.

Cablas said she first heard a thud followed by a loud blast.

Guhitia, who was hit in the head by seven pieces of shrapnel,  was rushed to Davao City for further treatment.

Narciso said the fragmentation grenade landed right beside Guhitia, who was sitting at one of the stalls.

The victims were immediately taken by bystanders, police and local officials to different hospitals.

Narciso said police were looking into the possibility that rivalry among fish vendors was behind the attack or that it was some form of retaliation by people related to suspects in thefts of motor vehicles.

“We have so many arrested persons involved in carnapping, their companions might have retaliated, but the rivalry issue is the likely motive,” he said.

Residents of Midsayap are no strangers to bombings, having witnessed many such attacks by extortionists and allegedly by members of the breakaway rebel group Bangsamoro Islamic Freedom Fighters.