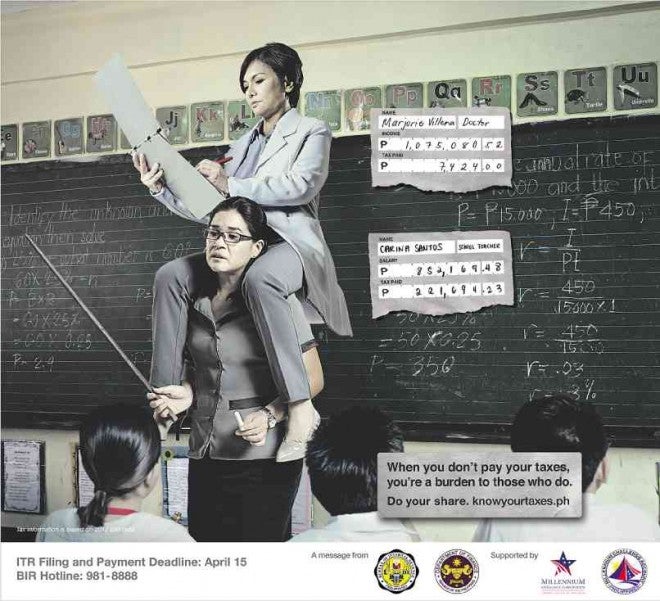 AD UNFAIR TO DOCTORS? This Bureau of Internal Revenue advertisement that appeared in the Inquirer on Sunday is deemed unfair by the Philippine Medical Association. But the BIR counters that doctors should not take the ad personally and just pay taxes honestly.

MANILA, Philippines—The Philippine Medical Association (PMA) is crying foul over a tax campaign advertisement of the Bureau of Internal Revenue (BIR) that appeared in a newspaper on Sunday portraying a medical doctor as a tax cheat.

“[T]o project to the entire nation through the trimedia that medical doctors are tax cheats per se is absolutely unfair,” PMA president Dr. Leo Olarte said in a statement.

Olarte was referring to the half-page ad, which was published in the Inquirer, showing a female doctor riding piggyback on a female teacher.

The ad carried the message: “When you don’t pay your taxes, you’re a burden to those who do. Do your share. knowyourtaxes.ph.” It reminded readers that the deadline for the filing and payment of income tax return was on April 15.

Olarte said the PMA would not tolerate tax cheats among its ranks. “[W]e will act immediately if these isolated cases can be brought formally to our attention.”

Internal Revenue Commissioner Kim Henares said doctors should not get hurt by the newspaper ad hinting rampant tax evasion among their ranks.

Henares said the print ad was based on numerous complaints received by the BIR from individuals that their doctors were not issuing receipts.

The ad was also based on actual data collected by the BIR showing significant discrepancy between taxes paid by doctors and their estimated incomes, she said.

“They have to accept that it is a common public perception that many doctors do not pay the right taxes. That perception is based on experience [by people who avail themselves of medical services] and on data we gather,” Henares said.

She noted that the figures shown in the print ad were based on actual income tax returns.

The BIR chief said doctors should not take the print ad personally. Doctors who claim to be paying the right taxes should not feel hurt by accusations that many of their colleagues are tax delinquents, she said.

Henares compared the notion that many doctors were tax evaders with the view that many government officials were corrupt.

Public servants who are not corrupt should not get hurt when they hear sweeping statements that government officials are corrupt, she said.

“Instead of getting hurt, they (medical industry) should take it as a challenge to prove to the public that tax-delinquent members have changed their habit and are already paying the right taxes.”

Olarte said the print ad came as a surprise to the PMA as it was not discussed in its various consultations with the BIR on the agency’s campaign against doctors who were not paying correct taxes.

He said the PMA fully supported the BIR’s campaign to collect the proper taxes “because we believe that taxes are the lifeblood of our nation. We, at the PMA, as productive members of the Filipino society, have been working hand in hand with the BIR toward the achievement of this goal.”

In a phone interview with the Inquirer, PMA spokesman Dr. Mike Aragon said the ad was unexpected since the organization had an ongoing partnership with the BIR.

“The PMA created a committee that would help the bureau [succeed in collecting correct taxes from doctors] and this engagement is [going on]. That’s why we were surprised that we were given this impression [as tax cheats],” Aragon said.

Olarte dispelled a general notion that all doctors practicing in the country were wealthy “due to a lucrative medical practice.”

He said most PMA members belonged to the middle class. “Only a few of us are lucky enough to rub elbows with the rich and famous, and many even fall within and below the poverty line.”

The organization has members earning a measly P15,000 every month, he said.

Olarte also pointed out that government doctors were earning a little over P20,000 monthly—a reason for the “overwhelming migration” of doctors abroad.

He said doctors in private practice were often faced with charity cases. “More than half of their patients are charity or nonpaying cases and they do not complain.”

Olarte said the medical profession would never be a burden to the country. “Doctors were trained and duty-bound to render a very noble service to our beloved countrymen. This involves protecting their health and saving their lives.”

He appealed to the BIR chief to temper the bureau’s public relations “spinmeisters” and encourage them to promote collaboration between the two organizations.

The campaign is implemented under the Revenue Administration Reform Program, one of the initiatives funded by a $434-million grant from the US government.

“We are appealing to Commissioner Kim Henares to instead intensify further our existing partnership by doing more joint activities on taxation,” Olarte said.

“We aim to accredit this user-friendly and interactive software and mobile phone apps system to the BIR. All this will surely help our members pay their taxes correctly,” he said.

Henares said the print ad should prompt the medical practitioners to work on changing their negative image and to promote tax compliance.

The campaign against tax evasion is meant to shore up the BIR’s revenue collection and boost state coffers amid the rising expenditure requirements of the government.

Besides publishing print ads, the BIR files tax-evasion cases once every two weeks in the Department of Justice as part of the tax drive.

The BIR is tasked with collecting P1.456 trillion this year, higher by nearly 20 percent from its collection last year.

Get a bank loan and pay your taxes, docs, lawyers told

Lawyers, docs: We’ll look like restaurants with menus on wall

Doctor’s lawyer decries lack of due process in tax raps