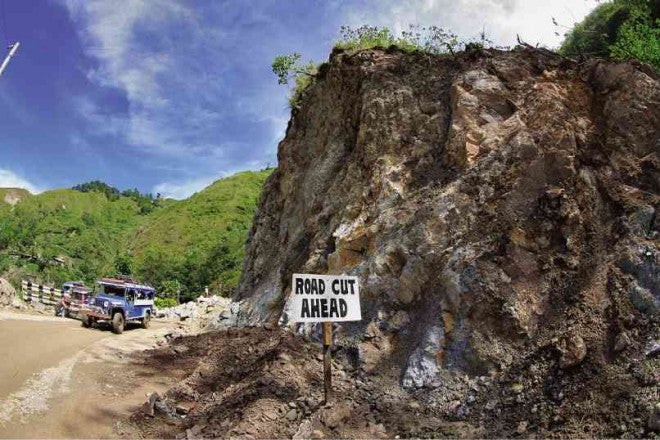 IN THE CORDILLERA, roads are a valuable commodity. Mountain highways are hard to build and are quickly worn out, but these ferry upland vegetables to Manila markets and determine the condition of upland commodities. VINCENT CABREZA/INQUIRER NORTHERN LUZON

BAGUIO CITY, Philippines—A letter of thanks from a mayor in the Cordillera region helped the government discover another attempt at deceiving government officials, this time for their farm-to-market road allocations.

Mayor Abraham Akilit of Bauko town in Mt. Province sent Agriculture Secretary Proceso Alcala a letter to express his gratitude for farm-to-market road allocations he had requested this year, surprising the Cabinet official.

Akilit referred to a written directive of an agency official, which turned out to be fake, putting the Department of Agriculture (DA) under high alert, said Marilyn Sta. Catalina, DA regional director in the Cordillera.

Last week, she advised all Cordillera officials that they discovered a scheme to broker agricultural road projects, after Agriculture Undersecretary Dante Delima alerted all regional offices about the foiled scam on Feb. 4.

“One of these mayors (Akilit) sent a letter to Secretary Alcala to thank him for granting his request and that’s how this scheme was discovered,” Sta. Catalina told the Inquirer by telephone on Feb. 26.

Akilit received a Jan. 17 memorandum, supposedly written by one of the agency’s officials, Joaquin Abejar Jr., Sta. Catalina said. It instructed the DA Cordillera office to process the Cordillera mayors’ requests for farm-to-market roads this year.

Abejar is “the assistant regional director designated as special assistant for regional engagements at the office of the secretary,” according to the DA website.

But the real Abejar had written Akilit, a former Cordillera director of the National Irrigation Administration, to disown the letter sent to the mayor last month.

“The letter is clearly… a forgery,” he told Akilit in his Jan. 23 letter, and described the intended scam as “bogus and anomalous.”

Abejar told Akilit he was hurt by the fact that the false letter tried to tarnish his name and his job at the agency. “We are keen in unmasking the people behind this scheme,” he said.

Similar letters may have been sent to other mayors, Sta. Catalina said. The fake Abejar memorandum was disseminated at the same time some people were reported to have visited the mayors in January to offer to help speed up the project allocations, she said.

The Cordillera is entitled this year to an allocation of P700 million for farm-to-market roads, but the projects would be undertaken by the Department of Public Works and Highways, not the local governments, Sta. Catalina said.

When asked, she said she has yet to determine how the people behind the fake Abejar letter would have used it to get funds from these projects.

“I asked the mayors who received the letter if the men offering to fast-track the projects had asked for money, and they said no one had,” Sta. Catalina said.

The fake letter was printed on an official DA letterhead and the phrase “Matuwid na daan” (straight path) prominently printed at the bottom of the page.

Citing instructions given by “our good secretary,” the letter directed “all concerned… to process [the] farm-to-market road requests” of Bauko, which would cost the government P108.8 million.

It said the DA approved Bauko’s request for the improvement of the following farm-to-market roads for a first phase of allocations that would cost P24.95 million: the Pangao-Nabutigan, Bonga-Sengyaw; Tapapan-Kwabeng; Abatan-Poblacion; and Guinzadan-Banao.

A second phase of the projects requested by Bauko would have cost P33.97 million for the following roads: Bagnen Oriente-

Abejar had asked Akilit to cooperate in the DA investigation to track down the source of the fake letter.

The DA had been at the center of the pork barrel storm because of allegations that bogus nongovernment organizations of detained businesswoman Janet Lim-Napoles had facilitated agricultural projects funded by the pork barrel of lawmakers.

Some of these projects were coursed through corporations under the DA. Vincent Cabreza, Inquirer Northern Luzon