MANILA, Philippines—A taxi driver who returned 1,000 Australian dollars (around P40,000) that an arriving passenger had left in his cab has been hailed for his honesty by the Ninoy Aquino International Airport (Naia) management. 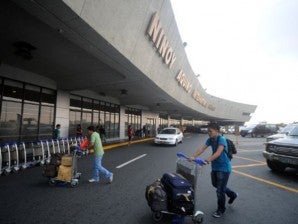 Genelito Macaraig, a driver of Assi Coupon taxi turned over to the Manila International Airport Authority (MIAA) police a belt bag containing the money and other valuables that one of his passengers had left behind on Wednesday evening.

The driver said he had just dropped one passenger off at a bus terminal in Pasay City and another in Quezon City and was on his way back to the Naia when he discovered the belt bag. The bag contained a cell phone which was used to contact the owner who is set to reclaim his valuables Sunday.

“I am proud that there are more and more airport workers who are returning the valuables that they find. The culture of honesty is very much around at the Naia,” MIAA General Manager Jose Angel Honrado said in a statement.

The MIAA chief, however, also warned passengers going to or coming from the Naia to be wary of and report unscrupulous taxi drivers who overcharge and become rude or threatening when confronted by their passengers.

According to the Airport Police Department’s intelligence and investigation section, in some instances, arguments with drivers about overcharging end up with the passenger being robbed.

The APD said the erring taxi drivers, who usually drive ordinary-looking cabs and unmarked service vehicles, pick out foreigners and offer to drive them from the Naia. The victims would then be quoted a high and unreasonable fare, up to as much as P5,000. If the passenger does not agree, the driver becomes angry and takes the passenger to a remote area and drops him or her off there.

The police said this was what happened to two newly arrived Danish women who hired a taxi to drive them to a spa just a kilometer away. The driver demanded P1,500 and threatened the passengers when they refused. The passengers found that all the doors were locked and they could not get out of the cab. They were forced to get off in a remote place with their bags. The driver sped off as soon as they alighted.

In some cases, the police said the cab driver would speed away before the passenger can unload his luggage which the taxi driver had made sure to lock up in the trunk.

Acting on the information provided by the Danish women, the police tracked down the cab driven by Jason Cabalza, who was discovered to have pending criminal cases and arrest warrants for five incidents of robbery filed by passengers he drove in different vehicles last year.

Cabalza was arrested on Feb. 18. Aside from the case filed by the Danes, Cabalza was found to have victimized a Canadian, a South Korean and an overseas Filipino worker.

“We will be watching for other taxi drivers [like Cabalza]. The commitment to duty of our airport police will surely lead to the arrest of other unscrupulous drivers,” Honrado said.

It’s more fun in PH with these honest taxi drivers

Let’s invest in the right kind of leadership