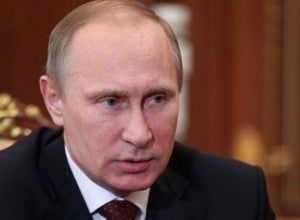 MOSCOW – The newly-chosen prime minister of the Ukrainian southern region of Crimea on Saturday called on Russian President Vladimir Putin to help restore “peace and calm” to the Black Sea peninsula, amid a standoff with the new authorities in Kiev.

“Taking into account my responsibility for the life and security of citizens, I ask Russian President Vladimir Putin to help in ensuring peace and calm on the territory of Crimea,” Sergiy Aksyonov said in an address quoted by local media and broadcast in full by Russian state television.

Aksyonov was chosen by local lawmakers in Crimea as the region’s premier, in a move that was not approved by the new authorities in Kiev who took over after the overthrow of president Viktor Yanukovych.

He did not specify what the assistance from Putin and Russia might involve.

Aksyonov also said in the address that all the security forces in Crimea – which has the status of an autonomous republic within Ukraine – were now subordinate to him.

“As prime minister of Crimea, I have taken the decision to subordinate directly to me the units of the security forces of the interior ministry, security service, army, navy, tax service and border guards.”

“I order all commanders to fulfil only my directives. All those who do not agree I ask to leave the service,” he added.

He said he had taken the decision in response to the appointment of the head of the Crimea police force by Kiev, a move he said was illegal and resulted in rioting.

His comments came as heavily armed troops in uniforms with no national insignia took up positions around government buildings and the airport in Crimea’s main city of Simferopol on Friday.