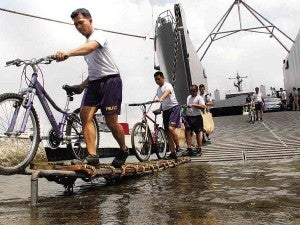 MANILA, Philippines—All cities and municipalities will have a “bike park” if this bill becomes a law.

House Bill No. 3827 by Pasay City representative Emi Calixto-Rubiano seeks the establishment of a park exclusively for bicyclists, according to a statement on Saturday.

The proposed measure titled “Bicyclist Act of 2014” mandates the city or municipal engineer to implement the bike park and other bikeway projects.

The solon said the use of bicycles would be good for the bicyclist’s health and would decongest traffic.

Under the bill, a Local Bikeways Office would be established to handle the bikeway projects.

The engineer’s office would also draft the duties of a bicyclist, which includes obeying traffic regulations and wearing appropriate gear.

A bicycle registry would also be created, according to the bill.

The bill is referred to the House committee on transportation.

‘Give us back our roads’