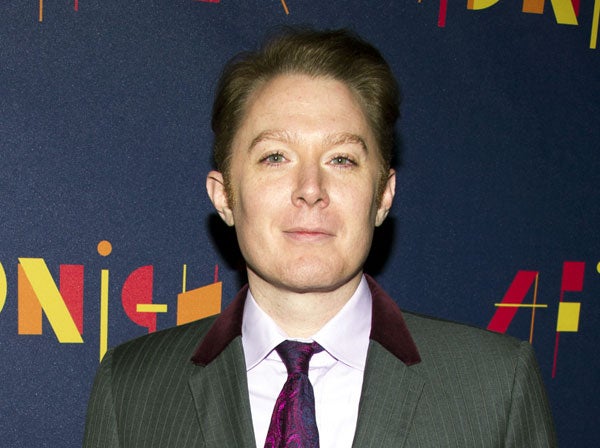 This Nov. 3, 2013 file photo shows former “American Idol” contestant Clay Aiken at the Broadway opening of “After Midnight”in New York. Aiken officially filed Thursday, Feb. 27, 2014, to run for Congress in North Carolina, saying that he wants to help end the gridlock in Washington and that no single political party has all the answers. (Photo by Charles Sykes/Invision/AP, File)

RALEIGH, North Carolina—Singer Clay Aiken, a former “American Idol” runner-up, officially filed Thursday to run for Congress in North Carolina, saying that he wants to help end Washington’s paralysis and that no single political party has all the answers.

The openly gay performer, a Democrat, turned in his paperwork to seek the Republican-held seat. Aiken, who lives in the Raleigh-Durham area, announced his bid three weeks ago and must first try to win the Democratic primary in less than 10 weeks.

The district, which covers areas outside Aiken’s native Raleigh, is considered Republican-leaning. But Aiken said the district’s voters want to choose the candidate who believes “we’re not going to have success just based on one party or the other — that we all have to work together.”

“They are enthusiastic about seeing change,” he added later.

Aiken, who finished second to Ruben Studdard in TV’s 2003 “Idol” competition, became a sensation a decade ago, with supporters called “Claymates” a common sight at his concerts.

Aiken said he’s not anxious about whether rough politics are ahead, saying he’s been through a lot the past decade. He’s released several albums and performed on Broadway. The 35-year-old also worked a special education teacher, UNICEF representative and presidential commission member on education.

On Thursday, Aiken surrounded himself with family and former teachers while speaking to reporters.

Aiken announced in 2008 that he’s gay and has a son conceived through in-vitro fertilization with a female friend. He’s said he doesn’t believe his sexual orientation will play a role in whether people vote for him.

While shunning the politician label, Aiken said he’s been interested in politics for a long time. He recalled how in the early 1990s he interviewed a senator for a project and invited a congressman to his Raleigh school.

Aiken said lowering unemployment and veterans issues are among his top priorities. He said he thinks some changes can be made to President Barack Obama’s health care overhaul law but doesn’t want to repeal it. Aiken supports abortion rights and considers his political philosophy in the broad middle between political extremes — he says he was once a registered independent voter.

Winning the seat will be a challenge. Republican Mitt Romney won 58 percent of the vote in the district in the 2012 presidential race, according to a North Carolina Chamber analysis. Analysts say Aiken stands a decent chance to win the Democratic primary, but the district boundaries drawn by Republicans will make it difficult for any Democrat to win in November.

If Aiken manages to win his party’s nomination, he could face an incumbent weakened by her own primary. Ellmers, a two-term congresswoman, faces her a challenge from a conservative radio talk show host, and she has been criticized by limited government tea party forces who helped her get elected as not conservative enough. She narrowly defeated an incumbent Democrat in 2010, before the district was redrawn to become more safely Republican.