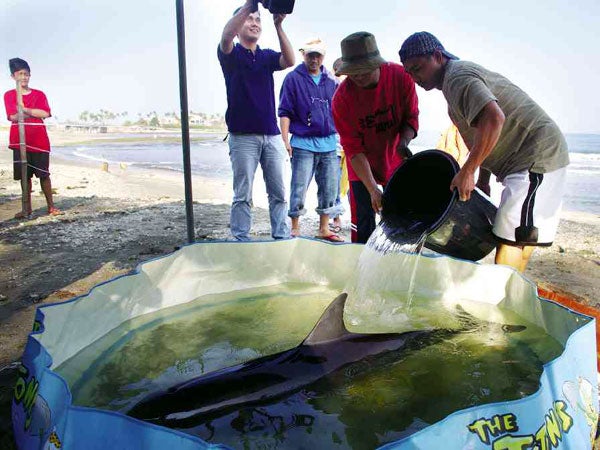 BADOC, Ilocos Norte—Unabated blast fishing in Ilocos Norte province’s waters and its neighboring coastal areas has been identified as one of the major causes of dolphin stranding here, a report of the Philippine Marine Mammal Stranding Network (PMMSN) chapter in the province said on Tuesday.

Since February, PMMSN has recorded nine instances of dolphin stranding in the country, seven of which occurred in northern, central and southern Luzon and Central Visayas regions.

The latest case involved a spinner dolphin (Stenella longirostris), which was found near the shore of Gabut Sur village here on Feb. 13, weak from an old shark bite wound, fishery officials said.

It was the third dolphin found in the coastline of Ilocos Norte this year.

The dolphin, which was named “Valentina,” has undergone treatment and rehabilitation at a makeshift pen in the neighboring coastal village of Gabut Norte, Valente said.

He said the dolphin suffered from a posttraumatic condition and needed to undergo therapy exercises and medication.

Valentina might have been disoriented by blasts, which caused it to lose control of its navigational senses, Valente said. “We’ve been trying to help [the dolphin Valentina] restore her buoyancy and hopefully release her once she regains her strength,” he said.

The dolphin is strapped with an improvised floater, which allows it to move freely in the water.

On Jan. 17, a female rough-toothed dolphin, measuring 1.73 m, was beached in the village of Virgen Milagrosa here. The dolphin was released the next day. But it was again stranded due to bad weather, and eventually died.

“It’s hard to pinpoint just one [reason for the rise in stranded dolphins in the country],” said PMMSN president Dr. Lemuel Aragones, who is spearheading the study and monitoring of marine mammal stranding in the country.

“I would say climate change is just one of the many factors. I believe that our sentinels (these marine mammals) could be indicating to us many things like their environment is being polluted,” he said. Leilanie Adriano, Inquirer Northern Luzon