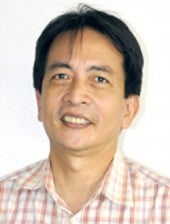 Tan, Anthropology professor and dean of the College of Social Science and Philosophy and Professor, bested six other nominees after seven out of 10 members of the Board of Regents (BOR) voted for him.

Under Republic Act no. 9500, the chancellor is responsible for the administration of a UP campus.

In his vision statement, Tan said UP should not “rest on [its] laurels.”

“My vision is of a UP that takes its place as a national university, a place to nurture not just brightness but diversity. UP Diliman must show the way in transdisciplinary initiatives in teaching, our graduates grounded in the liberal arts, able to see and appreciate the poetry in mathematics, as well as the mathematics in poetry,” he said.

“I envision a UP in terms of a shared culture of academic citizenship built on collegiality, a sense of justice and fairness, and ethics,” he added.

Tan received his PhD in Anthropology at the University of Amsterdam in The Netherlands and his MA, also in anthropology, at the Texas A&M University in the United States. He took veterinary medicine at UP Diliman.

He started his column “Pinoy Kasi” for the Inquirer in 1997.