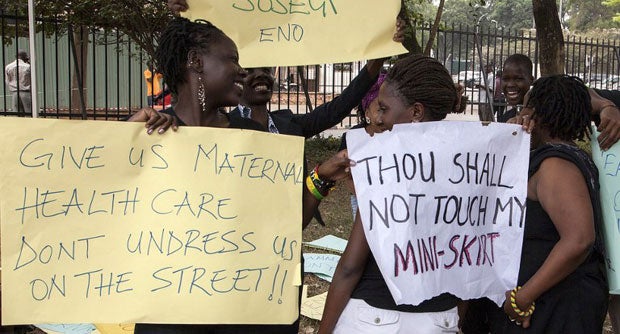 Women protest against the new anti-pornography and dress code legislation on Wednesday, Feb. 26, 2014, in Kampala. AFP

KAMPALA—Ugandans protested Wednesday tough new laws against homosexuality and indecent clothing, with women gathering in tight skirts warning that mobs had already harassed them for their dress.

On Monday, President Yoweri Museveni signed a bill into law which holds that repeat homosexuals should be jailed for life, outlaws the promotion of homosexuality and requires people to denounce gays.

“Women are being undressed simply because they are putting on little skirts, tight trousers or leggings,” said Isabella Akitang, one of the women participating in the protest about dress outside the National Theatre in the capital Kampala.

“There is no justification for any violence against women, for rape.”

Those opposed to the anti-gay law did not openly take to the streets, with fear sparked by the listing of people accused of being gay by the Red Pepper newspaper for a second day Wednesday, alongside lurid stories of alleged homosexual actions.

UN chief Ban Ki-moon has called on Uganda to repeal the tough new law on homosexuals, warning it could fan violence and impede responses to HIV and AIDS.

However, Uganda’s health minister Ruhakana Rugunda has said that all people are “at complete liberty to get full treatment” and healthcare, with medical workers bound by confidentially rules not reveal a patient’s sexuality, he told the BBC.

The passing of the bills have been largely popularly received in Uganda, where Museveni—in power for 28 years—faces reelection in 2016.

However, protestors in Kampala said the laws were a way of diverting attention from other issues in Uganda.

“These laws are just a way for Museveni to hide what is really happening : this country in failing,” said protestor Patience Akuma.

“I have myself been stopped and harassed by a police officer because I was wearing a miniskirt. He slapped me when I tried to take his picture. At the post office, I was told to come back when I would be properly dressed.”

Some women wore shorts, carrying signs that read, “Thou shalt not touch my mini-skirt.”

“This violence is escalating, this is just the beginning,” said Nargis Shirazi, another protestor.

“Unless we stand out and talk about it, we are going to get into worse situations… our laws should stop focusing on the way women are dressed, and start getting on with the real issues.”

The signing of the anti-gay law came despite fierce criticism from Western nations and key donors, including US President Barack Obama, who has warned that ties between Kampala and Washington would be damaged.

Some donors were quick to punish Kampala by freezing or redirecting aid money, while Sweden’s Finance Minister Anders Borg, who visited Uganda on Tuesday, said it “presents an economic risk for Uganda”.

But protestors in Kampala said they were more concerned about a more immediate and physical impact to themselves.

“One of the dangers (of the anti-pornography law) is what you are seeing already, women being undressed—but it is also a threat to us and our security as women,” Akitang added.

“There is no definition of indecency in this bill. If you decide that in my trousers and my big bum I am being indecent, you would have all the right to put me into jail. For a mini-skirt, for an indecent outfit that has no definition?”—Emmanuel Leroux-Nega