In PMA, honor is not a hard concept to grasp | Inquirer News
Close
menu
search

In PMA, honor is not a hard concept to grasp 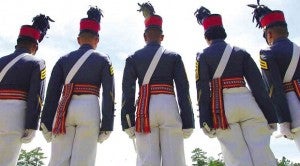 HONOR The Philippine Military Academy molds future leaders of the country’s military through an honor system that does not tolerate lying, cheating or stealing. RICHARD BALONGLONG

Rumors turned viral last week after news that graduating Cadet First Class Aldrin Jeff Cudia was discharged from the Philippine Military Academy (PMA) by a council of cadets for lying, a violation of the premier military school’s Honor Code.

Military officers who march at the PMA’s Borromeo Field as cadets are required to make this pledge: “We, the cadets, do not lie, cheat, or steal, or tolerate among us those who do.”

The PMA website also points out: “No cadet, regardless of his rank and class, is above the [honor] system. No violator of the code is granted immunity. No cadet who violates the code can redeem himself from the violation he commits.”

Cudia has contested his discharge, accusing nine voting members of a 25-member honor committee of violating its own rules when it recommended his separation from the cadet corps for lying to justify a two-minute tardiness in class.

His sister, Avee, made the cadet’s fight public over social media to draw sympathy and support.

But the first thing newspapers, television news commentators and bloggers emphasized in addressing Cudia’s case was to enumerate the disgraced PMA alumni who had been accused of or convicted for various crimes.

“Many people have been skeptical about the PMA Honor Code. It worked for many of us in the military. [The system] that enforces the Honor Code is not perfect, but the code works,” says retired Maj. Gen. Leopoldo Maligalig, PMA superintendent from 2006 to 2008, and the commandant of cadets from 2004 to 2006.

The Academy Scribe, a three-volume narrative about the PMA, says the school set out to shape “a properly documented and definitive concept of honor” at the end of World War II, when it sent out a social committee to the US Service Academies in 1949 to document how these military schools enforced an honor system.”

The Scribe cites an article attributed to the Class of 1951, which established the impact of the honor system on the cadet corps: “We admit that every man who enters the academy has been subjected to different environments, which we cannot expect to change in a short time, but we strive to help him in his adjustment to a new system where his word is accepted as the truth.”

“Truth was the virtue of the corps,” the Scribe says, so the system requires every cadet to “always tell the truth and to keep his word,” and admonishes him against tolerating dishonesty, cheating, “quibbling, evasive statements and tricky wordings.”

Maligalig says honor is a simple concept. “It’s really about revealing our soul. Did I intend to do this? Did I take undue advantage of others in acting this way? If the answer is no, then my conscience is clear,” he says.

But there are people who will not take to honor as fish is to water.

The Scribe says: “As in all generalities, there exists an exception, a certain individual will fail the trust exacted of him by the code. Herein lies the main task for which the honor committee, a purely cadet body, was organized.”

It says the committee used to be an investigative body. Recently, it looked into cases, judged and sanctioned cadets for honor violations.

The academy is reviewing how the honor system proceeded in handling Cudia’s case, upon the instructions of Armed Forces chief of staff, Gen. Emmanuel Bautista.

Only nine members of the committee may vote to arrive at a verdict of “guilty” or “innocent” in all honor reports (complaints) that are presented to the group, says Maj. Agnes Lynette Flores, PMA spokesperson.

The committee is required to elevate its decision before the PMA staff judge advocate, who will determine whether the process and the subsequent ruling “followed legal parameters,” before it is submitted to the PMA superintendent, who enforces the recommended punishment.

Flores says the committee ruling could be appealed within seven days. Once that lapses, the academy would impose a penalty or discharge a cadet. The cadet would subsequently be separated from the military by the commander-in-chief, in Cudia’s case, President Aquino.

Flores says the honor system itself is not the subject of the review, but several alumni who spoke to the Inquirer believe the controversy has once more put the Honor Code at risk.

Cudia is not the first cadet to question an honor committee ruling. Records show several of these decisions were raised in court during the 1970s. The PMA lost three of these cases because the honor committee procedures were deemed unconstitutional.

An enhanced honor system was introduced by Maligalig and his predecessor, retired Lt. Gen. Cristolito Balaoing Jr., when they designed and employed a reform program for the academy, called the PMA Roadmap to 2015, which reshaped the curriculum.

“The weakening of the honor system had been identified to be one of the crucial problems facing PMA. This observation has been given credence by a spate of corruption scandals that have caught the attention of the media involving some PMA graduates, strengthening the call by the alumni … for a review of the honor system,” according to an article written for a new edition of the Academy Scribe by the late 1st Lt. Francis Damian.

A member of Class of 2007, Damian had cited a 2005 survey of 711 cadets from Classes 2006, 2007 and 2008 during Balaoing’s term. In that survey, 33 percent disagreed with the phrase, “There is nothing wrong with the honor system;” 35 percent indicated they were unsatisfied with how the system had been administered; and 21 percent indicated that not all cadets reported honor irregularities as required by their oaths.

The enhanced honor system does not amend the Honor Code itself, Damian had pointed out. But the new system changes the honor system from a punitive system to a lifestyle to be followed by new leaders trained by PMA.

He wrote: “The honor system exists primarily to develop the character of cadets, not to restrict or regulate their behavior. Honor should be understood as simply abiding [by] the regulations but as a preferred way of life. The rationale: The restriction of one’s action [is] temporary for as long as the cadet is in the academy. However, the development of character builds leaders who are willing to live a life of honor even after graduation.”

Maligalig says the honor system continues to adapt to a changing world.

In the end, what remains a constant in the PMA’s campaign to build honorable men are families who shape children selected to become cadets, he says.

“A soldier who was taught not to steal, cheat or deceive by their parents would most likely navigate unscathed the dark places filled with corrupt people. In the end, a man makes mistakes because of his bad role models. That’s what society should be concerned about,” he says.