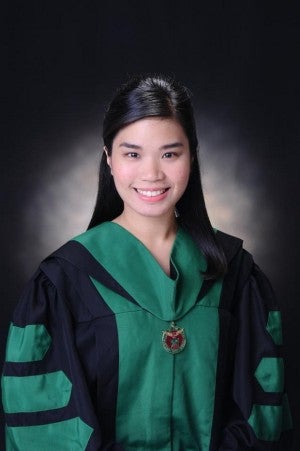 MANILA, Philippines—“I was molded by the University of the Philippines to serve, and I will definitely give back.”

Angeli Andrea S. Cocos, 25,  made this promise after she topped this year’s physician licensure examination.

“I was molded by UP to serve and not to turn my back on my obligations as an Iskolar ng Bayan,” Cocos told INQUIRER.net. “I should behold gratitude to the university and to the country that became part in the realization of my dreams,”

A graduate of the University of the Philippines in Manila, where she also took her undergraduate study as a biology student,   Cocos said she knew it was her calling to be a doctor.

“I can’t think of doing anything but this,” she said.

“I studied hard for the examination. I have to admit I am studious. I prayed to be on the top 10 but I made it to the top. God is so good,” she said.

She revealed that she was supposed to take the examination in August 2013 but moved it to February this year because the examination date fell on a Saturday, a sacred day for Seven Day Adventists like her.

Despite lucrative opportunities abroad, she admitted that she never intended to work overseas.

She only wanted to go abroad to pursue post-graduate studies to enhance her expertise, but working overseas has never been an option.

Cocos credits her UP education with bringing out the best in her,  she said. As a medical student, her patients, she said, are her best mentors: “Be thankful because patients will be the best teachers of all.”

“I learned to care for them not only physically, but as a whole person,” she added, citing that she always wanted to use a holistic approach in caring for her patients.

Her mother, an obstetrician-gynecologist, and her father, who works as a company nurse in Saudi Arabia, inspired her a lot.

“I thank them for being very supportive. They never force me on the things I should do in life. They gave me the guidance I needed,” she said.

She also acknowledged the dedication of her medical professors in UP.

“I am thankful for my professors for their passion to impart their knowledge even without being paid,” she said. She believes it is also their way of giving back to the country.

Cocos said she looks forward to working and sharing her knowledge with the medical profession.