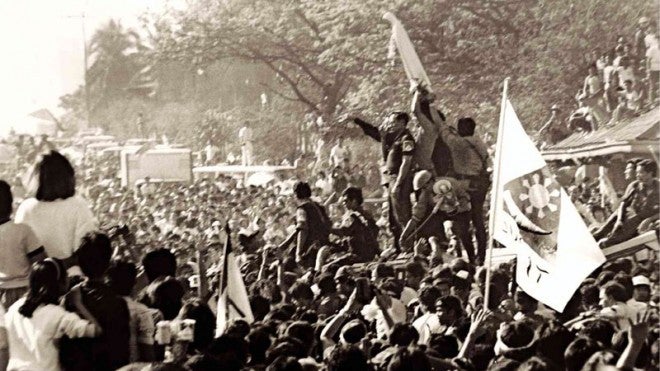 Coup leaders Fidel V. Ramos, then Armed Forces vice chief of staff, and Juan Ponce Enrile, then defense minister of the dictator Ferdinand Marcos, address an ecstatic crowd outside Camp Crame at 7:30 a.m. on Feb. 24, 1986. Two fighter planes defied orders to bomb the camp and headed back toward Clark Air Base in Pampanga province. INQUIRER PHOTO

MANILA, Philippines—No need to go to Edsa to commemorate the 1986 People Power Revolution.

Former President Fidel V. Ramos said on Monday the spirit of the revolution could be kept alive by simple acts of “caring, sharing and daring” in the service of the country in the wake of a series of natural disasters last year.

On the 28th anniversary of Edsa I, Ramos led the wreath-laying ceremonies at the Tomb of the Unknown Soldier at Libingan ng mga Bayani in Taguig City in commemoration of countless unnamed soldiers and civilians who struggled to restore democracy in the Philippines against the dictatorship of  Ferdinand Marcos.

Ramos began the program by calling on the people in the crowd to give their seatmate a handshake, a kiss and an embrace.

“This is the way we did it at Edsa,” said Ramos, then chief of the Philippine Constabulary who, along with then Defense Minister Juan Ponce Enrile, broke away from Marcos to lead the uprising on Edsa.

Ramos said the gesture of solidarity was a moment he recalled when he saw a Filipino soldier last November carrying a rescued woman in Eastern Visayas after Super Typhoon Yolanda struck.

“The sacrifices made in 1986 were relived by the many soldiers and personnel who reported for work after Yolanda, despite not knowing if their own families were surviving,” he said in remarks to the gathering.

“The same heroism is true for many of our civilian people,” he said, referring to the volunteers and donors during the disasters.

He hailed the decision to move this year’s Edsa commemoration away from the traffic-clogged Edsa highway to the calamity zones.

“The changes in the way we celebrate people power mirror the new mind-set that we must carry in this time when the entire country is striving toward recovery. The journey to recovery must be fueled by concrete acts of caring, sharing and daring for our countrymen,” Ramos said.

Jose Pardo, vice chair of the event’s organizer, the Edsa People Power Commission, noted in his speech that the same “idealism and inherent compassion” powered the 1986 revolution and the outpouring of aid after Yolanda, the Zamboanga siege and the Bohol earthquake last year.

“That is why this year’s celebration of people power is dedicated to the bayanihan shown by soldiers as well as civilians in overcoming different tragedies,” Pardo said.