Edsa as party, history, memory of a people 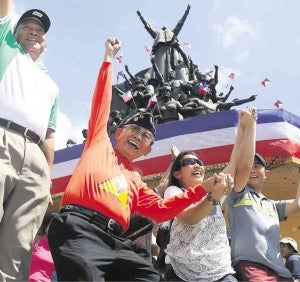 FVR VICTORY JUMP. Former President Fidel V. Ramos reenacts his trademark jump at the People Power Monument on Edsa in Quezon City on the eve of the 28th anniversary of the Edsa Revolution. MARIANNE BERMUDEZ

Edsa. A name familiar to Filipinos of every age, yet vastly different in each mind’s eye.

My generation, having been approximately negative-10 years old at the time of its incidence, knows of its events only through textbooks, lectures, and, should we be so lucky, stories from our parents and grandparents. Doubtless, I should be so lucky.

And yet, Edsa, until a few days ago, has remained something of a myth in my mind: a miraculously bloodless revolution that propelled a heroine from the life of a housewife to the Office of the President.

This larger-than-life view of Edsa may be a facet of the truth—however, after listening to Mom and my titas’ recounting of events, I believe that to portray Edsa as a myth is to diminish its uniqueness.

One condition: no violence

As narrated to me by Mom and Tita Ballsy (Aquino-Cruz), the first large-scale call for change occurred a few days after the snap election of Feb. 7, 1986, in which Lola Cory was cheated of the presidency. People were telling her that she should end her silence, that she couldn’t just sit and do nothing. Though she eventually agreed to this and much more, she always maintained one condition: no violence.

She thumbed down some politicians’ suggestion to have her first postelection rally at Liwasang Bonifacio, a smaller and therefore easier to fill venue. Lola believed Luneta to be the only venue large enough to prove she was truly wanted as President, should people fill it up.

People brought parents and grandparents, children and grandchildren, ultimately making the event less of a rally and more of a family affair.

It was a show of support for one family by thousands of others, proof that no one would have to go through the change that Lola called for alone.

And as she stood on a truck for a makeshift stage, having been denied use of the grandstand, she struggled with a faulty microphone to give her speech. Still, she resonated with the people, because she asked not for power, but for strength.

Soon after, she planned to travel to several major cities of the Philippines to gather support. On Feb. 22, while she was in Cebu, some so-called military rebels who were nearly uncovered planning a coup against then President Ferdinand Marcos sought refuge at Camp Aguinaldo.

It was then that Butz Aquino and Jaime Cardinal Sin called people to the streets to protect the rebels and show their support.

After Lola returned to Manila, some of her advisers told her to leave the country. But her resolve remained: Why leave when the fight was here?

So as not to add to the burden of securing many members of the family, Mom and her sisters were asked to just stay put in the house. They learned the state of things only through Radio Veritas, the newspapers and TV broadcasts having all been censored.

Maybe my biggest misconception, though, was the physical state of Edsa. Every day on the way to school, I pass by the People Power Monument by White Plains; I already think that area too huge to be filled up by human bodies like in the pictures.

When Mom told me to delete Galleria, then Megamall, then nearly everything else there (which I forgot did not exist before my time) from my mental map, and replace that space with a sea of humanity stretching up north to Cubao and down south to Shaw, I was taken aback anew. But the numbers, though impressive in their own right, for me, pale in comparison to the miracle that no blood was shed.

I’ve always associated big crowds with stampedes and King of the Hill-type things, in which smaller people are stepped on so bigger people can get what they want. During People Power, though, each person shared his ground with millions of others and stayed his hand.

From myth to truth

Mom called the Edsa Revolution “not really a revolution.” It was people spending time, sharing food, telling stories—like a party, really, albeit a party amid tanks and soldiers.

Normally, I’d have burst a vein if anybody called our history a party, but there was truth in her words in the sense that Edsa, unlike other insurrections, was more about bringing people together than tearing them apart.

It was that simple reality that made Edsa not merely a story, but a memory to the people who experienced it. And for me, it was in sharing this memory that Edsa transformed from a myth to a truth.