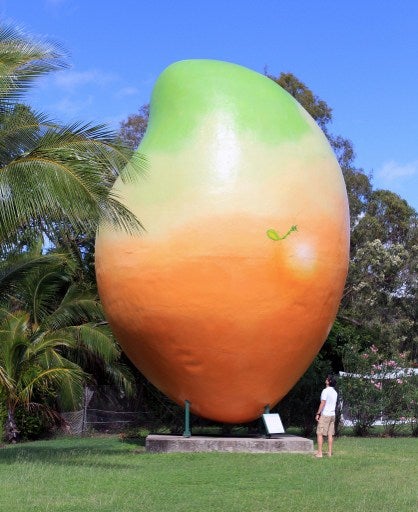 This undated picture released by the the Bowen Tourism Center shows a man standing next to a 10-metre and seven-tonne mango monument in the statue’s hometown of Bowen, in Queensland. AFP FILE PHOTO

The Big Mango, a towering likeness of the fruit which is abundant in the statue’s hometown of Bowen, in Queensland, is one of more than 150 “Big Things” erected as kitschy tourist attractions across Australia.

The famous fruit, which was unveiled in 2002, appeared to have been harvested overnight in an ambitious raid, said Bowen Tourism chairman Paul McLaughlin.

“It looks like it was sort of two o’clock this morning-type thing. There was … some heavy equipment and it looks like they’ve taken the mango,” McLaughlin told the Australian Broadcasting Corporation.

He said he thought it was a joke when he was first informed of the mango’s abduction but “I’ve come out and sure enough the mango has disappeared.”

McLaughlin said there was surveillance camera footage of the heist and he was sure the plundered fruit would be found.

“At the end of the day it’s a bloody big mango and I’m sure someone will see it and we’ll find it anyway,” he told the Brisbane Times.

“I think it’ll definitely turn up, no doubt about that. We’re not sure what has happened but I’m sure we’ll get it back.”

There are giant fruits all over Australia, including the Big Banana, the Big Pineapple, the Big Strawberry and multiple Big Apples and Oranges.

There are also giant fishes, a lobster, penguin, kangaroo, koalas, and even a giant cask of wine.

Bowen is known as the mango production capital of Australia.