Solons got P5B in DAP during impeachment trial of Corona 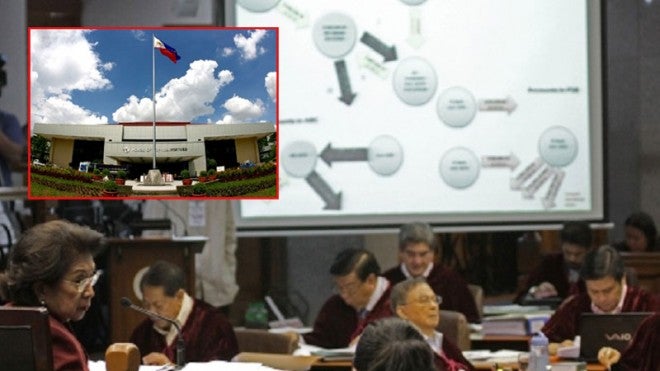 File photo of the impeachment trial of former Chief Justice Renato Corona at the Senate.The Aquino administration used P6.5 billion from the little-known Disbursement Acceleration Program (DAP) before, during and after the impeachment trial of then Chief Justice Renato Corona to bend Congress to its will, two members of the House of Representatives have told the Inquirer. INQUIRER FILE PHOTOS

The Aquino administration used P6.5 billion from the little-known Disbursement Acceleration Program (DAP) before, during and after the impeachment trial of then Chief Justice Renato Corona to bend Congress to its will, two members of the House of Representatives told the Inquirer.

The sources estimated that the House got as much as P5 billion in DAP funds, while the senators received the remaining P1.5 billion, as admitted by the Department of Budget and Management (DBM) itself.

The sources, who did not wish to be identified because of the confidential information involved, said the DBM released to the representatives at least P10 million each from the DAP, supposedly a novel scheme to stimulate the economy.

The amount represented P7 million for farm-to-market roads and P3 million for soft projects, such as milk-feeding programs, under the DAP—an impounding mechanism supposedly for government savings that shifted funds from projects identified by Congress to those chosen by the executive branch in 2012.

The funds released to congressmen from the DAP, whose constitutionality has been questioned in the Supreme Court, were on top of the P70 million in annual allocations from the Priority Development Assistance Fund (PDAF), or pork barrel.

The sources said that the House leadership and its impeachment team were rewarded between P25 million and P50 million in DAP funds after Corona was convicted in May 2012, or seven months after Budget Secretary Florencio Abad announced the P70.5-billion spending plan for the DAP, including a P6.5 billion augmentation for the PDAF.

They said they were asked by the DBM to give their preferred LGUs and beneficiaries for their DAP allocations.

Asked for comment, Speaker Feliciano Belmonte said: “I cannot remember the incident. Haven’t heard of DAP back then. We will check.”

Abad was adamant that the DAP was not meant to bribe lawmakers into ousting Corona whose midnight appointment by former President Gloria Macapagal-Arroyo was widely reviled.

“The allocations, if I recall correctly, were made irrespective of whether the representatives were for or against the impeachment,” Abad said.

Corona was convicted for dishonesty in his statement of assets, liabilities and net worth.

In a statement, Navotas Rep. Tobias Tiangco said: “Based on reports and by its own admission, the DBM used the DAP before, during and after the Corona impeachment trial between 2011 and 2012.

“Corona was impeached on Dec. 12, 2011, endorsed by 188 congressmen. Based on the timeline, the DAP was created in October 2011 and fund requests made by legislators were already in order in November 2011—or exactly during the time they were cooking up and gathering support for the Corona impeachment.

“It’s a puzzle that only a few knew about DAP then.”

Tiangco, the United Nationalist Alliance (UNA) secretary general, said the DAP was “used as an excuse to cover the P50-million bribe to senators and P10 million given to congressmen for the conviction” of Corona.

“The DAP was designed and created as a piggy bank to fund persuasive missions with a very special purpose,” Tiangco said.

The DBM earlier claimed that DAP funds were released after Corona’s conviction because it was wary it could be seen as an attempt to influence Corona’s removal.

“No one knew about the DAP until September 2013 when Sen. Jinggoy Estrada disclosed that the administration tapped the funds to ‘bribe’ lawmakers to oust Corona. Until now, the Administration is not telling everything about the DAP—they’re twisting the facts to cover it up because they know it’s illegal and unconstitutional,” Tiangco said.

In a phone interview, Agrarian Reform Secretary Virgilio de los Reyes said that when his agency received several special allotment release orders (Saros) and notices of cash allocations (NCAs) on Dec. 6, 2011, he was unaware that these were DAP funds. He said supporting documents identified the funding from the 2011 budget for beneficiaries of the Comprehensive Agrarian Reform Program (CARP).

The Inquirer has copies of the DAR’s Saros and NCAs for six senators worth a combined P475 million—P100 million each for Estrada, Ferdinand Marcos Jr. and Ramon Revilla Jr.; P70 million for Vicente Sotto III; P55 million for Juan Ponce Enrile; and P50 million for Loren Legarda.

De los Reyes said Abad had asked him to accommodate the release of the funds for the senators whose beneficiaries turned out to be fake foundations used by detained businesswoman Janet Lim-Napoles in the alleged P10 billion pork barrel scheme.

He said he told the budget secretary that the DAR was yet to spend the P1 billion lump-sum funds that the DBM had allocated for 2011 and that he insisted that the new funds go through the required processes.

“We spent lots of time and manpower to spend the P1 billion by the book, we couldn’t just accept fresh funds and just release [the money] without putting it through the same process,” De los Reyes said.

The DBM had a different version. In a statement, it claimed that Estrada, Marcos, Revilla and Sotto had requested the realignment of the funds from the DAR to state-owned National Livelihood Development Corporation (NLDC). (The DBM has not yet revealed where the DAP funds of Enrile and Legarda went, although a government source said these were diverted to LGUs).

“The requests—which were made by the senators’ offices in late December 2011 and early February 2012—were received by the DBM in early February and March 2012. The four senators essentially asked us to change the implementing agency from DAR to NLDC.

“In their requests, Senators Marcos, Estrada, Sotto and Revilla changed their nominated projects to programs for displaced or marginal families, for which NLDC was specified by the senators’ offices as the implementing arm. We thus withdrew the earlier Saros for the DAR and issued these instead to NLDC in March 2012, exactly as the senators requested,” the DBM said.

In their letters to NLDC, the senators were adamant on the immediate release of the funds as these would be used for the victims of recent natural calamities.

But just like the DAR, NLDC president Gondolina Amata told the DBM of her reluctance to have the state micro-lending firm used again as a conduit for the senators’ funds.

Amata also thought the funds the DBM gave to her in March 2012 were from the PDAF that NLDC had stopped dealing with since the COA started its probe of the fake foundations getting pork barrel funds.

The DBM, however, prevailed on her to release the funds as these were the DAP and not the PDAF.

Abad practically washed his hands of any responsibility on the deployment of the funds, saying this was a matter between the implementing agency (IA) and the lawmaker. “You will have to ask the IA and the legislator what happened,” he said.