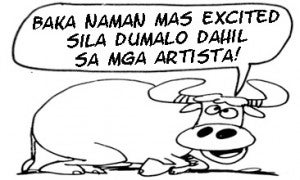 CEBU CITY, Philippines—Don’t be surprised if you see movie actor Dingdong Dantes moving around dressed as a military general, possibly even chomping on a cigar.

On Tuesday, Dantes will play the role of then Armed Forces Deputy Chief of Staff Lt. Gen. Fidel Ramos during the reenactment of the famous “salubungan,” or encounter, between military rebels and civilians to mark the 28th anniversary of the 1986 Edsa People Power Revolution.

Marching alongside Dantes in the reenactment will be Sen. Bam Aquino, who will play the role of his uncle, former Sen. Agapito “Butz” Aquino.

Butz Aquino was among the civilian leaders who linked up with the military on Edsa in Quezon City during the 1986 uprising that toppled Ferdinand Marcos’ dictatorship.

No less than President Aquino himself, along with Cabinet members, is expected to watch the salubungan reenactment.

Actor-singer Ogie Alcasid, a member of the Edsa People Power Commission, is expected to sing during the festivities, which will last an hour, organizers said.

There was no word if Sen. Juan Ponce Enrile, then the defense minister who, with Ramos, led the rebellion against Marcos, would attend the festivities.

The script on the reenactment made no mention of Enrile or even of Sen. Gregorio Honasan, then an Army colonel and leader of the Reform the Armed Forces Movement (RAM).

“JPE (Enrile) has always been invited but he has only gone once, in 2012,” Salubugan project officer Shai Laman told the Inquirer.

It would be the first time the salubungan would be held in Cebu.

Cebuanos have been urged to wear yellow—the color of the Edsa People Power Revolution—for Tuesday’s celebration.

Philippine Information Agency Director General Jose Mari Oquiñena said young people who were not yet born at the time would get to understand that part of the nation’s history, where people went to the streets and ousted a dictator without firing a single shot. 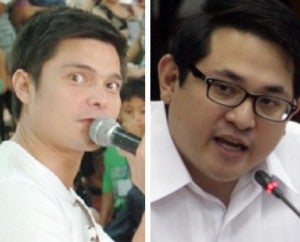 Actor Dingdong Dantes (left) will play the role of then Armed Forces Deputy Chief of Staff Lt. Gen. Fidel Ramos and Sen. Bam Aquino of his uncle former Sen. Agapito “Butz” Aquino during the reenactment of the famous “salubungan,” or encounter, between military rebels and civilians to mark the 28th anniversary of the 1986 Edsa People Power Revolution in Cebu City on Tuesday.

The salubungan symbolizes the historic merger of rebel forces led by Enrile and Ramos, which sparked the 1986 uprising. As the two forces merged, a sea of people linked arms to protect them.

In the reenactment, Dantes, who is chair of the YesPinoy Foundation, will be joined by 800 troops from the AFP Central Command, who will play the roles of rebel soldiers.

They will converge at Our Lady of Sacred Heart Parish along Escario Street before marching to the provincial capitol, 500 meters away.

They will join some 3,000 students from the University of

After converging on the capitol grounds, the “civilians” will give flowers and flaglets to the soldiers, reenacting what happened on Edsa in 1986.

The President is expected to go to Bantayan Island at 10 a.m. to meet the victims of Super Typhoon Yolanda, who had undergone livelihood training in carpentry, plumbing and masonry.

Aquino will also visit the public market of Bantayan before proceeding to Palo town in Leyte and Guiuan town in Eastern Samar to hold “town hall” meetings with the survivors.

Oquiñena said the salubungan organizers would not stop militant groups from holding protests but he asked them to give the President and the occasion due respect.—With a report from Ador Mayol, Inquirer Visayas

People power rites in Cebu, not at Edsa