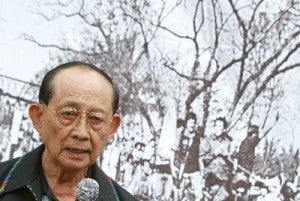 The former head of the Philippine Constabulary will be at the helm of the flag raising and wreath laying event to pay respects to the martyrs and heroes of martial law.

Ramos, remembered for his trademark jump during the culmination of the Edsa People Power, was among the key people who defected from the administration of strongman Ferdinand Marcos. He joined former defense minister and now senator Juan Ponce Enrile in supporting Corazon Aquino.

People power rites in Cebu, not at Edsa