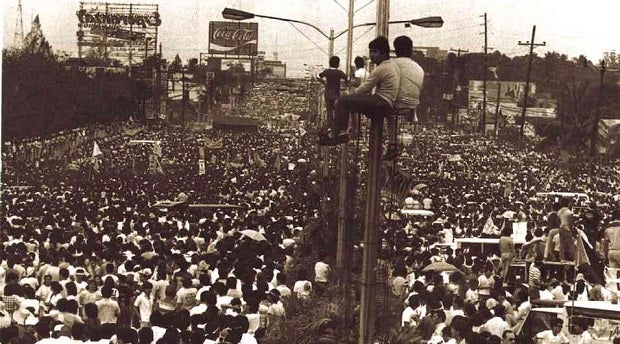 THE EDSA revolution broke out against a yet-uncluttered urban backdrop in February 1986.

If the Edsa Revolution were to happen today, People Power might temptingly include a side trip to the mall. The loyalist Gen. Fabian Ver would have a hard time looking for open fields to deploy tanks but could put snipers up on the billboards, and the defecting Lt. Gen. Fidel V. Ramos would still make his famous victory jump—though with fewer people to see him, thanks to the elevated railway blocking the view. 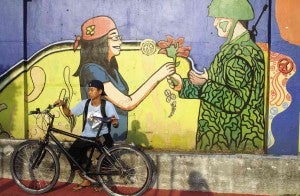 A SECTION of the mural titled “Journey to Peace on Edsa” on the walls of Camp Aguinaldo, one of the pockets of public art the highway needs. JOAN BONDOC

The MRT alone would make then Defense Minister Juan Ponce Enrile think twice about crossing over from Camp Aguinaldo to Camp Crame. With today’s traffic jams, Ver’s tanks and armored personnel carriers would not have gotten far.

Stretching for about 24 kilometers, the country’s busiest highway has since gotten busier, brighter, though in some parts blighted. Long gone are the days when a drive through Edsa offered a mostly low-rise, green and breezy vista which, thankfully back in 1986, made for sweeping, panoramic shots of mass upheaval, uncluttered by a giant Anne Curtis or fried chicken ad.

If Edsa itself can be considered a monument to the revolution, then its transformation for the last 28 years—progress to some, poor urban planning to others—fittingly reflects the very hallmarks of the uprising: the spontaneity, the fiesta spirit, the patchwork of diverse faces and forces. 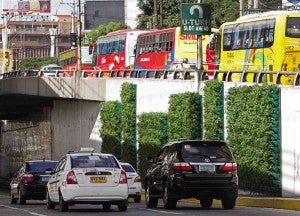 To paraphrase a Counting Crows song, we have paved historic ground and put up a parking lot—and much, much more:

The Metro Rail Transit (MRT): It was opened in December 1999 during the short-lived presidency of Joseph Estrada, which two years later became the casualty of the second Edsa Revolution. The single biggest mass transport project on the highway in the post-Marcos years, the MRT is under growing pressure to expand and cope with the swelling passenger volume. A commuter revolution is waiting to happen there each morning.

Flyovers: Imagine the Edsa gridlock at the intersections without them; four are in use today and also provide some of the U-turn slots on the highway. 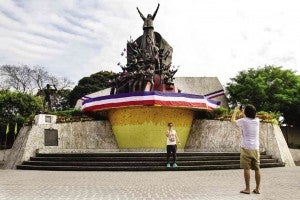 THE ED Castrillo masterpiece has 37 cast members but symbolizes the aspiration of millions. Leo M.Sabangan

Malls, malls, malls: Construction of SM Megamall, for example, started in 1989 or just three years after the revolution. Occupying 21 hectares, the Henry Sy retail complex opened in mid-1991. The neighboring Robinsons Galleria of the Gokongweis opened a year earlier, its website proudly describing it as “a famous Edsa Revolution landmark.”

Giant outdoor ads: There were already prominent outdoor ads on Edsa in the mid-1980s but they mostly had neon light displays and were few and far between, unlike today’s ubiquitous towers of steel and tarpaulin that tend to be eyesores rather than enticements.

High-rise condominiums: Some cashing in on the MRT stations and the need for minimal home-to-work travel time, these developments stick out of the horizon, dwarfing neighboring buildings—and possibly the local government’s will to uphold zoning laws.

The Number Coding Scheme: Not all major changes on Edsa are about structures. Implemented across Metro Manila but enforced most especially on Edsa during rush-hours, the scheme bans a vehicle from the road on a weekday depending on the last digit of the plate number. Its earlier version, the Odd-Even scheme, was introduced in 1991 by then Transportation Secretary Oscar Orbos.

Yellow lanes for buses: Another Orbos idea still drawing the line to this day.

Blue lanes for motorcycles: Introduced on Valentine’s Day in 2012 by the Metropolitan Manila Development Authority (MMDA) under chair Francis Tolentino, in response to the alarming number of accidents involving motorbikes.

Murals: Amid the noise and fumes, public art is making an assertion. The one at the Cubao underpass, finished in 2012, is a joint project of the MMDA and the paint company Boysen, and conveys the urbanite vision of Finnish architect and filmmaker Tapio Snellman.  An earlier project, a mural by Jose Tence Ruiz, features Nature images on the white walls of San Lorenzo Village, Makati City.

“Journey to Peace on Edsa”: Deserving of a separate mention is the mural completed in 2013 on the walls of Camp Aguinaldo, a People Power site. “Journey to Peace on Edsa” depicts historic milestones and peace-building initiatives of the Armed Forces of the Philippines (AFP), including symbols and scenes from the 1986 Revolution. The collaborative work stretches for about 3,700 meters around the camp, with AG Sano as its lead artist.

Vertical gardens: A welcome touch of greenery in the underpasses. An agreement reached last year between the MMDA and outdoor advertising organizations will soon require the latter to allot space for or incorporate vertical gardens in the design of their billboards.

“Reblocking”: The word has entered street lingo, quite literally, in recent years, basically referring to the government’s public works projects removing old road pavement and laying fresh concrete. Dreaded as a cause of massive traffic jams, the practice often raises questions especially if the stretch of road set to be “repaired” still looks perfectly fine. It continues to ruin many weekend drives on Edsa.

Our Lady of Edsa Shrine: It is said that the idea to put up a shrine at the corner of Edsa and Ortigas Avenue to commemorate the revolution came from one of its key figures, the late Jaime Cardinal Sin, according to edsashrine.com. “The Cardinal was riding in the car together with Bishop Gabriel Reyes, then Auxiliary Bishop of Manila, en route to Camp Aguinaldo where they were to celebrate a Thanksgiving Mass. They came upon the intersection…and Bishop Reyes pointed it out to the Cardinal as the spot where intrepid but gentle nuns and young men and women stood in front of the tanks and offered flowers to the soldiers.” Before the shrine was built, the area was just an empty lot with two huge billboards of the Family Rosary Crusade, featuring the image of the Blessed Virgin Mary and the slogans, “The family that prays together stays together” and “A world at prayer is a world at peace.” Forming the apex of the structure is the Marian bronze statue by the late artist Virginia Ty-Navarro.

People Power Monument: The bronze tableau by sculptor Ed Castrillo is fittingly a “crowd shot” of 37 figures depicting the various sectors of Philippine society that trooped to the highway as a unified force for change, with Inang Bayan or Motherland as the dominant figure. Costing P100 million to build and installed in 1993 at the corner of Edsa and White Plains Avenue, it has since served as the main venue for the government’s commemorative activities.