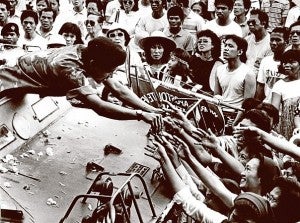 CATHOLIC nuns and supporters of the people’s revolt greet a soldier aboard a V-150 armored tank on Edsa in 1986. FILE PHOTO

MANILA, Philippines—The true spirit of the 1986 Edsa Revolution should not change despite the problems being faced by key personalities involved during the historic People Power, Malacanang said Saturday.

Valte was referring to the charges against Senator Juan Ponce Enrile, one of the lawmakers charged with plunder over the multi-billion Priority Development Assistance Fund (PDAF) or popularly known as the pork barrel scam.

Enrile, who was the defense minister during the administration of President Ferdinand Marcos, withdrew his support from the dictator and joined the peaceful revolt in 1986 that catapulted the presidency of Corazon Aquino.

Valte said that Edsa “belongs to the people” and should not focus solely on the major players in the 1986 revolt.

This year, Valte said that the Aquino administration is “looking beyond” the historical context of the 1986 revolt.
She said the 28th year celebration of the Edsa People Power  would “recognize people who quietly kept the spirit of People Power alive” by standing by their fellow filipinos in times of need.

She said this was evident in the last quarter of 2013, when many Filipinos were affected by recent calamities including Super Typhoon “Yolanda” (Haiyan).

“The spirit of Edsa is alive not just on Feb. 25, but when we help fellow Filipinos in their hour of need,” she said.