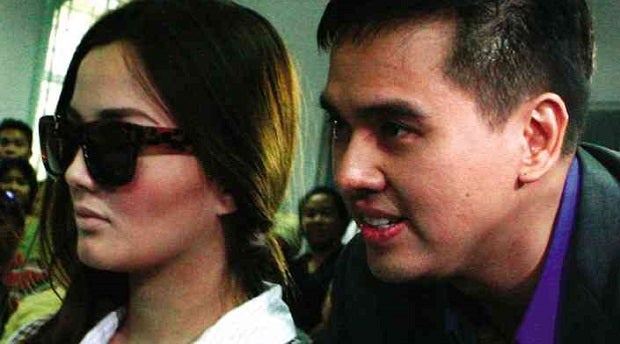 “VICTIM” AND “RESCUER” Model Deniece Cornejo and businessman Cedric Lee face a DOJ panel Friday. She has accused actor Vhong Navarro of rape, with Lee claiming he caught the ABS-CBN star in the act. In Vhong’s version of the story, however, they are partners in an extortion scheme. KIMBERLY DELA CRUZ

MANILA, Philippines – Model Deniece Cornejo and businessman Cedric Lee finally showed up at the Department of Justice on Friday to answer the complaints for serious illegal detention and physical injuries filed against them by actor and TV host Vhong Navarro, whom Cornejo had accused of rape.

In an interview later with reporters, Calleja insisted that Navarro was not unjustly detained in connection with the Jan. 22 incident at Cornejo’s condo unit in Bonifacio Global City, where the model cried rape and Lee claimed that he and his friends caught Navarro in the act that’s why the actor got a severe beating.

Navarro, however, denied there was rape and said he was set up for mauling and extortion that night by Cornejo, Lee and six other people.

The panel ended the proceedings around 4 p.m. and gave the counsel of another respondent, JB Calma, until Feb. 28 to file his reply.

Calleja asked to be given more time for his clients to file “more comprehensive counteraffidavits,” but the request was denied.

Speaking to reporters, Calleja explained that one reason for his request was the admission by the National Bureau of Investigation, Navarro’s co-complainant, that the security camera footage the NBI obtained from the condo building and which became the basis of its findings were edited copies and not the entire recording.

Calleja also questioned the panel’s decision on Feb. 14 which declared Cornejo’s rape complaint as submitted for resolution even though she failed to show up for the DOJ hearing that day because of another hearing in the Taguig City court concerning her petition for a protection order. The petition was eventually denied.

The DOJ panel stood pat on its Feb. 14 ruling but allowed Cornejo to reaffirm her affidavit.

The only Calleja motion partly granted by the panel was the one that asked for the issuance of subpoenas to the Taguig policemen who handled the Jan. 22 incident. The panel ordered the policemen to submit their affidavits.

Calleja asked for formal written resolutions regarding the denial of his motions, an indication that he might question the panel’s rulings later in court.

Citing his denied motions, the lawyer said he felt that the case was being “railroaded.” Navarro’s lawyer Alma Mallonga, however, dismissed Calleja’s moves Friday as “dilatory.”

At one point during the hearing, a member of the panel told Calleja that “he knows what to do” or that he could resort to other legal remedies if his clients were not satisfied with the panel’s decisions.

Meanwhile, the security guards of Forbeswood Condominium, then Cornejo’s residence in BGC where the mauling and alleged rape took place, also submitted their affidavits to the DOJ.

Two other respondents in Navarro’s complaints—Jed Fernandez and Ferdinand Guerrero—have yet to show up for the preliminary investigation, while another respondent remains unidentified.