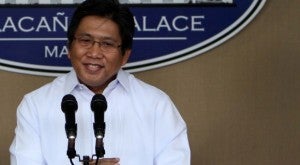 Coloma  issued the statement on Friday after Communist Party of the Philippines (CPP) founder Joma Sison expressed his willingness to continue peace negotiations with the government.

“The government remains open to all otions that it could undertake to attain peace,” Coloma said in a press briefing.

“That is why we do not only focus on the Bangsamoro. Our peace talks continue with members of our society that have pending  issue like the CPP-NPA-NDF (Communist Party of the Philippines-New People’s Army-National Democratic Front),” he added.

Coloma sadi that Secretary Teresita Deles of the Presidential Adviser on the Peace Process has been coordinating with the Norwegian government , which served as third party facilitator in previous talks, to open the discusiions with the communist insurgents.

Malacanang said  negotiations had collapsed due to disagreements on some demands of the rebels.