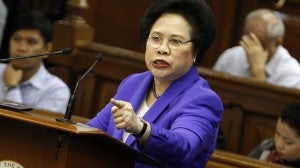 MANILA, Philippines—Sen. Miriam Defensor-Santiago vowed Thursday to rally her colleagues to repeal the libel provision of the cybercrime law, but also urged netizens to do this in court.

Santiago said that as it was worded, the libel provision in the Cybercrime Prevention Act of 2012—upheld in a Supreme Court ruling announced on Tuesday—was vague, and very broad.

“You hardly know who are covered by it. Although the SC said it is only the sender who is liable not the person who is commenting or who is receiving, but what does this word mean? Who is the sender? The service provider? The individual netizen? Or if they are a group, how are we identifying them? Or even worse, if they are not using their true identities, how are you going to go beyond what they profess to be their identities on the Internet? That is the main problem today,” she told reporters.

The language has become so vague, Santiago said, “that it becomes illegal since it is a very significant constraint” on freedom of expression.

“I humbly submit that the SC ruling on this particular provision is erroneous and I call on all netizens to magnify all our efforts and to speed it up as soon as possible so that we can either file a motion for reconsideration with respect to this particular libel provision or we can speed it up here in the Senate on that new law,” she said.

Legal but not moral

Santiago said she would fully support a motion for reconsideration, and vowed to “redouble” her efforts to convince the Senate to pass a new law repealing the online provision.

She said various states have passed legislation decriminalizing libel. “Meaning to say if you are proved to have been guilty of libel you no longer go to jail, but you have to pay damages to the person who has been injured,” she said.

The Supreme Court ruling came more than a year after netizens questioned the cybercrime law, which was signed in September 2012.

Senate Majority Leader Alan Peter Cayetano asserted that the libel provision in the law suppressed the freedom of speech of Internet users.

“What is constitutional and what is legal is not necessarily what is moral and what is right. The Supreme Court based it on the legality of the provision. But on the wisdom of the law, that is for Congress to determine,” Cayetano said.

Sen. Aquilino Pimentel III, chair of the justice committee, said he would call a hearing on proposals to decriminalize online libel. At least six bills on the issue have been introduced in the Senate.

In a statement, the Ecumenical Institute for Labor Education and Research Inc. said cyberlibel creates a “chilling effect” among workers, most of whom are nonunionized and are highly vulnerable to company harassment and retrenchment.

“We can expect corporations to use libel lawsuits to stifle workers’ voices and block democratic initiatives of workers online such as social media campaigns,” said the institute’s Carlos Maningat.

“Online libel further narrows the democratic space for Filipino workers who are increasingly turning to social networking sites to voice labor concerns in the absence of unions,” he added.

ACT Teachers Rep. Antonio Tinio said the court ruling was a “backward step,” noting the power of social media that was demonstrated in the public outrage against the pork barrel system.