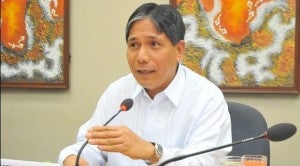 MANILA, Philippines–‎An alleged drug pusher who is reportedly an active member of the Bangsamoro Islamic Freedom Fighters (BIFF) has been arrested by anti-narcotics agents in Cagayan de Oro City.

“According to information, he is an alleged active member of the Bangsamoro,” said Cacdac in a statement.

‎A breakaway faction of the Moro Islamic Liberation Fronts, the BIFF is a Muslim secessionist group seeking an independent Islamic state in the Philippines.

In a buy bust operation of PDEA Misamis Oriental regional office, the drug peddler fell for the bait after selling to a poser-buyer one sachet of suspected shabu or metamphetamine hydrochloride.

The transaction and arrest took place on ‎Julio Pacana Street in Licoan town around 6 p.m. Monday.

Bayagna, according to PDEA, is a resident of Block 10, Lot 10, Bloomingdale Subdivision, Iponan, Cagayan de Oro

Confiscated from Bayagna were two pieces of heat-sealed transparent plastic sachet and a P500 bill used as marked money during the operation‎.