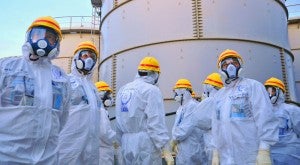 TOKYO – A new leak of 100 tons of highly radioactive water has been discovered at Fukushima, the plant’s operator said Thursday after it revealed only one of nine thermometers in a crippled reactor was still working.

The toxic water is no longer escaping from a storage tank on the site, said a spokesman for Tokyo Electric Power, adding it was likely contained, but the news is a further blow to the company’s already-battered reputation for safety.

“As there is no drainage way near the leak, which is in any case far from the ocean, it is unlikely that the water has made its way into the sea,” he said.

The tank, one of hundreds at the site that are used to store water contaminated during the process of cooling broken reactors, sits around 700 meters (2,300 feet) from the shore.

However, the water was highly radioactive, with a beta radiation reading “at 230 million becquerel per litre,” he said.

The contamination level compares with government limits of 100 becquerels per kilogram in food and 10 becquerels per liter in drinking water. A becquerel is a unit of radioactivity.

Beta radiation, including from cancer-causing strontium-90, is potentially very harmful to humans and can cause damage to DNA. But it is relatively easy to guard against and cannot penetrate a thin sheet of aluminium.

“We are now in the process of recovering the leaked water and the earth it has contaminated,” the spokesman added.

The tank holds water filtered to remove caesium but which still contains strontium, a substance that accumulates in bones and can cause cancer if consumed.

The accident came a day after TEPCO announced that one of the two thermometers in the lower part of the No.2 reactor pressure vessel is out of order. There were originally nine thermometers in the vessel, Kyodo News reported, but eight have now stopped working.

TEPCO said it can still monitor the temperature of the area with the remaining thermometer, Kyodo News and the Asahi Shimbun reported.

The device was monitoring the temperature of fuel that has been kept in “a state of cold shutdown” to prevent a self-sustaining nuclear reaction — criticality — the Asahi said.

Thursday’s leak announcement is the latest in a long line of problems the utility has had with waste water at the plant.

TEPCO poured thousands of tons of water onto runaway reactors to keep them cool, and continues to douse them, but has to store and clean that water in a growing number of temporary tanks at the site.

In August, TEPCO said around 300 tons of radioactive liquid was believed to have escaped, an incident regulators said represented a level-three “serious incident” on the UN’s seven-point International Nuclear Event Scale.

Two months later, the Fukushima plant had another leak of radioactive water containing a cancer-causing isotope, possibly into the sea.

At that time, TEPCO said a barrier intended to contain radioactive overflow was breached in one spot by water contaminated with strontium-90 — a slow-decaying isotope produced during nuclear reactions — at 70 times the legal limit for safe disposal.