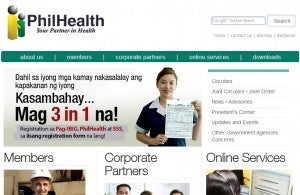 This was how a Department of Health official described a medical package offered by the Philippine Health Insurance Corp. that would now include the “very expensive” treatment of some “catastrophic illnesses.”

At the weekly Fernandina forum in San Juan on Wednesday, Dr. Antonio Paraiso, manager of the Department of Heath’s Philippine Network for Organ Sharing Program, said expanding PhilHealth’s Z Package to include kinds of sicknesses such as kidney failure, among others, was “a very bold move.”

The expansion was announced in February, months after PhilHealth announced an increase in the premiums of some of its members.

The state health insurance came under fire for that, as critics saw the then-planned hike in premiums as insensitive, especially since PhilHealth had given away bonuses amounting to P1.5 billion to its top officials and employees.

A petition to stop the hikes is pending in the Supreme Court.

According to Paraiso, who is also the head of the Philippine Renal Disease Registry, a usual kidney transplant in the country costs between P1 million and P1.2 million, a price range that would be “very expensive” for the ordinary Filipino.

The amount, he said, would include professional fees, the donor’s operation fees and the hospital bill.

“That’s a good one tenth of the (price of a kidney transplant) in the (United States),” he said, adding the price in the latter ranged from an equivalent of P8 million to P10 million.

He said under the package, PhilHealth could cover a maximum of P600,000.

This, he said, was an amount that was “usually enough” to cover hospital expenses.  “It’s a big help…I commend them,” he said.