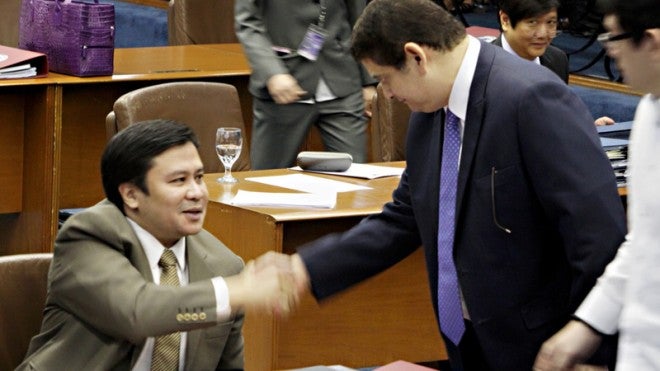 MANILA, Philippines—It wasn’t my intention to prejudge your case but Ruby Tuason had the goods on you.

This, in a nutshell, was Sen. Teofisto “TG” Guingona III’s message on Tuesday to Sen. Jinggoy Estrada who is under investigation for plunder in the Office of the Ombudsman in connection with the P10-billion pork barrel fund scam.

Estrada, in a manifestation on the floor on his birthday on Monday, questioned the propriety of Guingona’s statement that Tuason’s testimony against Estrada was a three-point shot that wasn’t only a buzzer-beater but also a winning shot.

In a privilege speech, Guingona denied that his “three-point-shot” analogy referred to the impact of Tuason’s testimony that for the first time detailed in the Senate blue ribbon committee how kickback money from the scam was personally and directly given to a senator.

“[Did] you take the testimony or the affidavit or the statement made by Mrs. Tuason as gospel truth?” Estrada told Guingona, the committee chair.

“I took as a testimony of a witness who for the first time came out and said that I personally gave money to a senator. For me that was significant,” Guingona replied.

Estrada then asked if Guingona didn’t consider other pieces of evidence before making such a statement.

“At that point, it was not a conclusion. It was an opinion as to the value of the testimony. And I disagree with you when you say that it contained nothing,” Guingona said.

“She remembers going down to the parking lot. She remembers faces of the staff—two staff members. I don’t think that’s bereft of details,” Guingona told Estrada. “On the contrary there are details there.”

Estrada then asked Guingona why he didn’t ask Tuason whether she also asked for project allocations from former and incumbent senators.

Guingona said he asked Tuason if she knew other senators but that the former social secretary of then President Joseph Estrada said she did not.

“Why didn’t you ask her that question? Why is it that only I and Senator [Juan Ponce] Enrile are being implicated by her testimony?” Estrada added.

“Maybe that should be addressed to Ruby Tuason. What is your pleasure, Mr. President?” Guingona replied.

Estrada said the issue was whether Tuason was lying.

“What is happening here is that you have already prejudged us, especially me, most especially me,” Estrada said to Guingona’s repeated denial.

Senate President Franklin Drilon suspended the session for an hour.

Estrada later said at the resumption of the session that he was asked by Drilon to stop the interpellation before it got too personal. Estrada said he also had a lengthy talk with Guingona.

“I think he is aware of all the sentiments that I mentioned to him. And all I advised him and all I requested is to have a fair committee hearing in the blue ribbon,” Estrada said.

Estrada and Enrile, along with Sen. Ramon Revilla Jr. and the alleged scam mastermind, Janet Lim-Napoles, are facing plunder charges. All of them have denied wrongdoing.