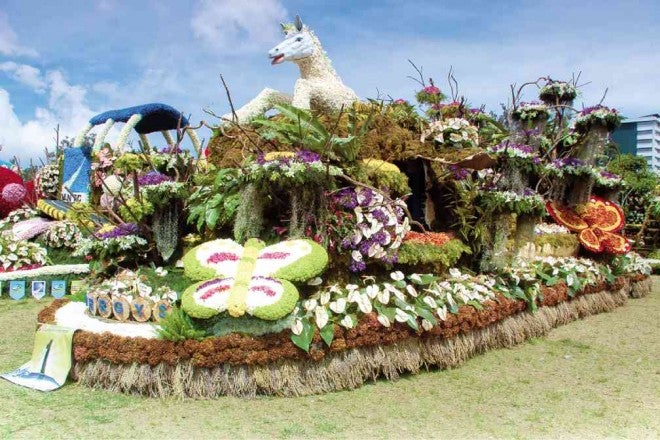 FLORAL FLOATS, like this one displayed in 2011, are among the attractions in the Panagbenga (Baguio Flower Festival), a major tourist-drawing event that Baguio City stages every February. RICHARD BALONGLONG

More than 18 years ago, visitors had no good reasons to go to Baguio City, the summer capital, in February. Some did for the sake of their children or relatives who studied at the Philippine Military Academy, the country’s premier military school.

Otherwise, February was a lean month for local entrepreneurs.

Many thus acknowledged the genius behind what was to be called the Panagbenga or the Baguio Flower Festival, which was first launched in February 1996. At that time, the city was reeling from the devastation wrought by a 7.7-magnitude earthquake in July 1990, which practically drove away tourists. Only trickles would come in the mid-1990s, even during the peak seasons, such as Christmas and Holy Week.

All that changed after Panagbenga (Kankanaey for a season of blooming), a festival to celebrate the time when flowers bloom. Eventually, visitors started coming, filling hotels, inns and transient houses. In due time, more hotels, restaurants and other establishments sprouted to cater to the thousands of people visiting the city for the month-long festival.

And that was precisely how lawyer Damaso Bangaoet Jr. envisioned it in 1995 when he proposed the idea of holding the Panagbenga to the board of directors of John Hay Poro Point Development Corp. He was then the firm’s vice president.

He saw something appropriate for Baguio as a tourism destination and a university town. He had thought that the mountain city, being known for its flowers (which actually come mostly from nearby La Trinidad town in Benguet province), could come out with a “family-oriented” event and, at the same time, boost the flower

Panagbenga’s success has proved to be phenomenal.

Street dancing, featuring some of the Cordillera’s traditional dances, and a parade of flower-adorned floats have since been the biggest crowd drawer. Done in February’s third weekend, both activities are the most anticipated, drawing visitors to the city’s business district.

A million visitors have been going to these events, says Bangaoet, citing the Department of Tourism’s figure. At a very conservative estimate that each of them would spend a thousand pesos a day for accommodation, food and souvenirs, at least P1 billion goes to the local economy, Bangaoet says.

No wonder, despite traffic woes and other inconvenience, all businesses—big or small—are happy. Hotels and restaurants, market vendors, flower farmers, taxi and jeep drivers, and makers of fruit jams, peanut brittle and other goodies are equally happy, he says.

Baguio has yet to study the festival’s economic impact. But the acknowledged “Father of Panagbenga” has already noted its “multiplier effects.”

P1 million to the treasury in

taxes from rent of stalls at the “Market Encounter” alone, Bangaoet says.

Residents are proud to have a festival featuring the best snippets of Cordillera culture as highlighted in the street dancing and a local version of flower festivals overseas, such as Pasadena’s Rose Parade in California. Such pride has also sunk into the their psyche so much so that they have become conscious to help beautify Baguio despite the city’s continuing war on waste.

Despite its success, Panagbenga is “still a work in progress,” he says.

As he and the organizers continue to “find ways and means of improving it,” the private sector and the city government have yet to learn to collaborate and coordinate well with each other, Bangaoet says.

“It’s not nice for the community to be witnessing these heated debates and exchange of negative comments,” he adds. He was referring to some animated debates in the city council recently mainly over some misunderstanding about earnings from the festival.

In contrast, the private sector and the local governments in the Visayas—which are known for their Ati-Atihan, Sinulog and Dinagyang festivals—seem to coordinate and work well

To sustain the Panagbenga tradition, Bangaoet suggests the need to continue tapping the creativity and innovation of the academe and other sectors, and managers, engineers, crafts people, artists, landscapers and other professionals.

“Much more can be done with less politics,” he says.