De Lima: We have enough evidence vs pork scam suspects 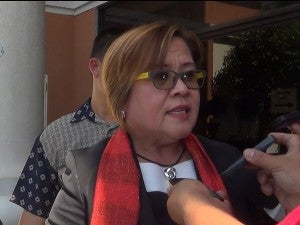 MANILA, Philippines—The Department of Justice has enough evidence to pin down those it had charged for plunder in the alleged P10-billion pork barrel scam and the testimony of Ruby Tuason was just “value-added,” Justice Secretary Leila de Lima said on Monday.

In an interview with reporters, De Lima dismissed as “far out” the suspicion of Sen. Antonio Trillanes IV that Sen. Juan Ponce Enrile was behind Tuason’s turning state witness and testifying last week in the Senate blue ribbon committee hearing on the alleged misuse of the congressional Priority Development Assistance Fund.

Tuason, a former social secretary of then President Joseph Estrada, who is now Manila mayor, returned on Feb. 7 from the United States where she fled after the scandal broke out in July 2013.

“As I have been saying, there is enough evidence already,” De Lima said. “I don’t think no one can dispute that [Tuason’s testimony] was value-added to our available evidence, which are the testimonies of Benhur Luy and the other whistle-blowers.”

On Sunday, Trillanes said in a radio interview that Tuason appeared to be protecting Enrile and that her testimony was worthless.

De Lima reiterated that Trillanes’ statement was apparently borne out of his frustration that he failed to get Tuason to say Enrile was involved in the purported scam.

“Tuason is not being presented as an expert witness but as a state witness based on her direct or personal knowledge,” she said.—Christine O. Avendaño