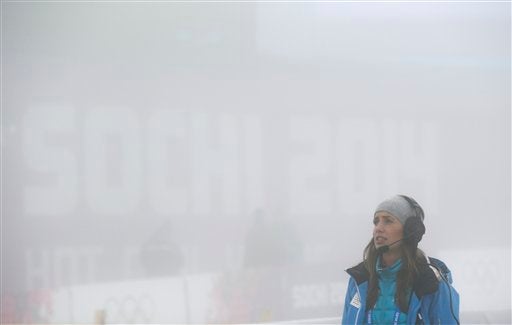 KRASNAYA POLYANA, Russia—After days of warm weather at the Sochi Olympics, fog up in the mountains is causing an even bigger disturbance.

Thick fog rolled in over the mountains in Krasnaya Polyana on Sunday night and was still lingering on Monday, and the limited visibility forced organizers to delay a biathlon race and cancel the seeding runs in a snowboard event.

The men’s biathlon mass-start race had already been pushed back from Sunday evening to 10 a.m. (0600 GMT) Monday, but was delayed again because of continuing fog. The new start time was set for 3:30 p.m. (1130 GMT) as officials expected the fog to lift by then. The women’s mass-start race was still set for its original 7 p.m. start.

“For the afternoon, there is a positive forecast,” said Peer Lange, a spokesman for the International Biathlon Union.

A race jury will make the decision on whether the visibility is good enough, Lange said.

At the Rosa Khutor Extreme Park, the seeding runs for the men’s snowboardcross were first postponed and then called off. That means the 39 competitors will automatically move to the elimination round, with the seedings based on the world rankings. The elimination races were set to start at 1:30 p.m.

The fog is causing a new challenge for the athletes following days of sunshine and unseasonably warm weather. At the Laura Cross Country Ski and Biathlon Center, the high temperatures toward the end of last week had softened the snow and led to some cross-country skiers cutting off the sleeves on their suits.

In biathlon, the fog is an even bigger problem because it limits the visibility on the shooting range.

“You have to be able to hit the targets,” said Jerry Kokesh, the editor of the IBU’s official website, adding that the course becomes more dangerous as well. “Uphills are not a problem, but downhills are. … That can be a serious safety concern.”

Rescheduling a race can be a tricky issue because of the tight Olympic schedule for both organizers and broadcasters. Lange said IBU officials make the decision when a race has to be moved, but the International Olympic Committee then has to give its approval.

Weather disruptions are not unusual in any skiing discipline, and there are options for the IBU if the mass-start race can’t go ahead Monday because both Tuesday and Thursday are off-days.