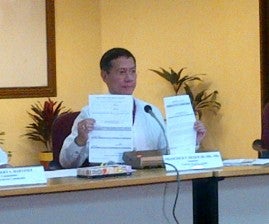 MANILA, Philippines — The Civil Service Commission (CSC) has declared “void” the Komisyon ng Wikang Filipino’s (KWF) twin directives placing under preventive suspension the agency’s human resource officer who earlier blew the whistle on the KWF head for his unauthorized alteration of the country’s name from Pilipinas to Filipinas.

In a 10-page decision, CSC Chair Francisco Duque III and Commissioners Robert Martinez and Nieves Osorio also ordered KWF Chair Virgilio Almario to reinstate Almira Divina Alejandrino to her position “with payment of back salaries and other benefits during the entire duration of her two preventive suspensions.”

Almario, a National Artist for Literature, had ordered Alejandrino’s suspension supposedly for loafing during office hours, dishonesty and unauthorized use of a KWF vehicle for a trip to the Court of Appeals.

The KWF chief, however, dismissed the administrative charges against Julio Ramos, Alejandrino’s immediate supervisor, who had authorized the use of the agency vehicle.

Contacted by phone, Alejandrino welcomed the CSC decision but expressed fear her troubles were not yet over.

“Chairman Almario has ordered my suspension anew, this time for one year without pay, for the same offenses,” she told the Philippine Daily Inquirer even as she expressed confidence the commission and Malacañang would not affirm the KWF order.

The KWF is under the Office of the President.

Alejandrino said “the KWF continues to give me hell, blaming me for reporting to Malacañang last year the ‘P’ to ‘F’ issue, for being responsible for the three-month suspension of a top KWF official for giving me the dirty finger and for blocking the appointments of three unqualified Almario recruits.”

Chief Presidential Legal Counsel Alfredo Benjamin Caguioa, in a letter to Alejandrino, told her they had referred her case to the Discipline Office of the Office of the President for “appropriate action.”

In August, Malacañang took Almario to task for tampering with President Aquino’s official message on the 225th birth anniversary of the poet Francisco Balagtas.

Undersecretary Manuel Quezon III of the Presidential Communications Development and Strategic Planning Office asked Almario to make the necessary corrections in KWF publications and refrain from altering the original message of the President.

The PCDSPO had acquired from Alejandrino a copy of the KWF publication Araw ni Balagtas where the word “Pilipinas” in Mr. Aquino’s message was changed to “Filipinas.”

Citing the Constitution, Quezon pointed out that the official title of the President was Pangulo ng Pilipinas, not Pangulo ng Filipinas.

Almario put the blame for the unauthorized “P” to “F” alterations on “our putative overenthusiastic proofreader who may have passionately believed in the wisdom of the language reform we are now undertaking.”

But he said it was necessary to promote the “P” to “F” campaign to explain the wisdom of adopting Filipinas as the country’s international name.

From ‘Pilipinas’ to ‘Filipinas’

Pilipinas or Filipinas? Proofreader to blame

Read Next
Egypt: Sinai blast kills 4 South Korean tourists
EDITORS' PICK
On Day 2 of implementation, gov’t says workers now exempt from ‘no vax, no ride’ policy
Gear up and get ready to play with Yamaha Mio Gear
DOH: 28,471 new COVID-19 cases in PH; active cases now 284,458
Metro Manila posts lowest temperature yet this ‘amihan’ season at 19°C
Over 3 Million worth of prizes to be won at Smart Padala’s SENDali Manalo Promo!
Acer starts the year off strong with the Aspire Vero National Geographic Edition
MOST READ
Emma Stone calls Andrew Garfield a ‘jerk’ after he ‘lied’ about his ‘Spider-Man: No Way Home’ appearance
LOOK: Edu Manzano, Cherry Pie Picache enjoy Palawan with her son Nio Tria
Unvaccinated has rights but it has limits—DOJ
Retirements prompting major reshuffle in PH military
Don't miss out on the latest news and information.