Man cut in half by SUV in QC 4-vehicle smashup; another killed | Inquirer News

Man cut in half by SUV in QC 4-vehicle smashup; another killed 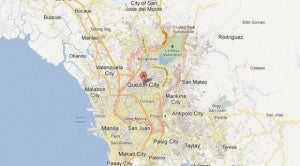 MANILA, Philippines – Two men were killed while three others were injured early Sunday in a four vehicle smashup allegedly caused by a sports utility vehicle crashing into a passenger jeepney that was unloading a passenger in Quezon City.

Jamel Pacasum of Cainta, Rizal, a passenger of a jeepney (TXA-725) plying the Cubao-Rosario route, was killed instantly after he was pinned between the PUJ and a Ford Escape wagon (XNE-898) while the latter’s passenger Ren Joseph Garcia died from massive head and neck injuries.

Chief Inspector Erlito Renegin, head of the Quezon City Police District (QCPD) Camp Karingal traffic sector, identified the driver of the Ford Escape as Jonathan Reyes, who was seriously injured along with his two passengers: Leonardo Miguel and Carlo Salazar. They remain confined at the Medical City in Pasig City for treatment of multiple injuries in the head and body.

Renegin said that the accident happened at around 3 a.m., Sunday, along E. Rodriguez Jr. Avenue in Barangay (village) Bagumbayan near Eastwood City.

Several PUJs had occupied a lane of the thoroughfare when the SUV loomed into view. Pacasum, the QCPD traffic sector chief said, was getting off a passenger jeepney when the Ford Escape crashed into it. Pacasum was pinned and practically cut in half by the impact.

Renegin said that the powerful crash caused the PUJ (TXA-725) to slam into two other passenger jeepneys, one with license plates UWG-980 and the other with NYD-603), in front of it.

Bystanders immediately brought the injured passengers, most of whom were pulled out from the wreckage of the Ford Escape, to the nearest hospital. Garcia died instantly from his injuries.

Renegin said that they are still investigating if the driver of the SUV, who is in critical condition, could be held liable for reckless imprudence, which resulted in the death of the two men and damage to other vehicles.