100 days after ‘Yolanda,’ Capiz moves on 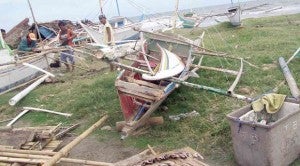 ROXAS CITY—Traffic stood still in this sleepy city on the eve of Valentine’s Day.

Capizeños came in droves to the province’s first complete and most modern shopping mall when it opened on Feb. 13, almost 100 days after Capiz province was hit by Supertyphoon “Yolanda.”

As a result, traffic was heavy in the roads leading to Robinsons Place Roxas located at the 300-hectare Pueblo de Panay commercial and residential complex here.

The mall’s opening gave Capizeños hope that the province would rise from the devastation and the economy of Capiz and northern Panay would be vibrant again.

“This shows that we continue to move on and that we are optimistic of our economic development even as we rehabilitate Capiz,” Capiz Gov. Victor Tanco said.

Capiz was brought to its knees after it was hit by strong winds and storm surges brought by the supertyphoon.

Power has not been fully restored three months after Yolanda, especially in far-flung and hinterland villages.

Capiz Electric Cooperative (Capelco), the province’s lone power distributor, incurred about P670 million in damage to infrastructure and facilities, including 30,000 toppled electric posts during the supertyphoon.

Capelco general manager Edgar Diaz said electricity had been restored in about 60 percent of the province with more than 200 barangays still without power.

He said full power restoration in the province could take up to March at the earliest.

It was not surprising that Capizeños, who were still reeling from the devastation, flocked to Robinsons Place Roxas when it opened on Feb. 13.

According to Governor Tanco, going to the mall was therapeutic for his constituents, many of whom were still coping with their losses.

The two-level mall was so full that some women were seen using the men’s toilet.

“It’s like shopping in Manila,” one of them said.

The shopping mall in Capiz was supposed to open last December but repairs had to be done due to the damage from Yolanda.

“We feel that Roxas, being the center of Capiz, will be able to draw in the market not only of Capiz but also of northern Iloilo and even as far as Masbate,” Arlene Magtibay, RLC senior vice president and general manager for commercial centers, told the Inquirer.

Robinsons Place Roxas is the chain’s second branch in Panay, next to Iloilo, and the 36th nationwide.

The mall has a total floor area of 37,400 square meters and a gross leasable area of over 23,000 sq m. It hosts boutiques, popular fast-food and quick-service restaurants, an amusement center, a food court, an al fresco dining area and four modern digital cinemas.

While Roxas may be a relatively smaller city compared to Iloilo City, the regional center, Magtibay said they had seen the province’s “steady economic progress.”

“It is a sizable market and it can actually now sustain a full service mall like Robinsons,” she said.

Trade and Industry provincial director Ermelinda Pollentes said the entry of Robinsons in Capiz “signals the opening of Roxas City and its readiness for big investors.”

Danilo So Chan, chair of the Provincial Micro, Small and Medium Enterprise Development Council, said that while the giant shopping mall would offer competition to small businesses, it would also create a bigger market because it would attract more businesses, traders and consumers from Aklan, northern Antique and parts of Mindoro and Masbate provinces.

The opening of the shopping mall is also expected to benefit the province’s tourism industry, one of its economic drivers aside from its famous seafood.

“This will attract more travelers and tourists here because we have expanded modern amenities in the city,” said Donnel San Antonio, president of the Capiz Tour Operators Association.

“It shows that Roxas City and northern Panay have the market for big investments,” he said.

But even as communities on Panay Island are hopeful of early recovery and economic development, several battered areas are still struggling to rise above the situation.

In Estancia town in Iloilo, nearly 700 pupils of Botongon Elementary School are still attending classes in tents about 100 meters from the devastated school.

The school, which was among those contaminated by an oil spill from a power barge, has also been declared part of the no-build zone.

“The makeshift classrooms are not conducive for learning because only blackboards divide the classes. The area also gets muddy when it rains,” said school teacher Leo Amisco.

Five classrooms, the principal’s office and the computer room were destroyed. About 700 books and 450 chairs were also washed away or destroyed.

Estancia, said electricity had been restored only in parts of the town proper.

Residents have also been demanding the fast-tracking of the cleanup of bunker fuel that has contaminated the shoreline of Botongon and neighboring villages.

About 900,0000 liters of bunker fuel leaked after the National Power Corp.-operated Power Barge 103 slammed against the rocky shores of Botongon on Nov. 8 last year at the height of the supertyphoon.

The oil spill contaminated the coastline and mangrove areas, and forced the evacuation of about 2,000 residents of Botongon on Nov. 23 due to a significant increase in air toxicity level.

All except about 100 families were allowed to return to their homes on Dec. 20.