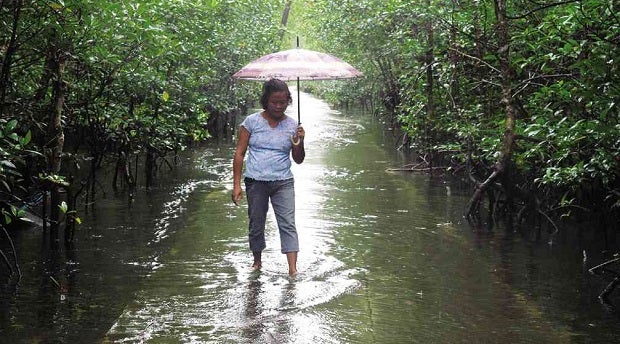 BARANGAY San Juan health worker Elenette Nalam wades through a road swallowed by seawater in the mangrove forest in her village. The mangroves, according to villagers, protected them from waves generated by Typhoon “Pablo.” KARLOS MANLUPIG/INQUIRER MINDANAO

HINATUAN, Surigao del Sur—Snuggled behind rocky mountains and directly facing the picturesque but treacherous Pacific Ocean, the sleepy fishing town of Hinatuan in Surigao del Sur province offers lessons on ways to adapt to the alarming changes in the environment.

Hinatuan brims with shells, seaweeds, fish, crabs and coconut products, but it is, unfortunately, a regular host to typhoons, which have claimed lives and brought huge damage to property and agricultural products, because of its location.

The Philippine Atmospheric Geophysical and Astronomical Services Administration (Pagasa) has its huge multistory Doppler radar station in the middle of the poblacion—a reminder to the people that they are in the path of weather disturbances.

In 2011, Tropical Storm “Sendong” made landfall in the town and killed at least 1,300 people across Mindanao.

Like the rest of the country, the residents of Hinatuan, most especially the fisherfolk and farmers, have found it hard to bounce back and regain their losses after a disaster. The damage brought by a recent disaster only worsens losses from the previous one, they say.

Last year, however, Hinatuan received national recognition when it was awarded the Gawad Kalasag Search for Excellence on Disaster Risk Reduction and Management and Humanitarian Assistance for the municipal category. One of its villages, San Juan, won the award for the barangay category.

The double recognition is the fruit of a more conscious community and unified efforts to make Hinatuan a safe place to live in.

Along the coastlines, simple water gauges have been mounted to serve as guides for fishermen. “Once the water level reaches the red mark, it will be like committing suicide to go out to sea. We are now conscious of regularly monitoring the gauges before sailing,” one of the fishermen said.

Information bulletin boards and signage are all over  town. In every village, signs showing instructions for evacuation and the direction of the nearest temporary shelter are visible.

And in almost every corner are posters bearing the mobile numbers of the Municipal Disaster Risk Reduction and Management Office, as well as the police and fire stations.

Emergency drills are held regularly, with the local government unit even sponsoring a contest to motivate the villages to be more serious in disaster risk reduction.

Peoples’ organizations had also played a huge role in the climate change adaptation campaign, according to Elenette Nalam, a barangay health worker of San Juan.

“One of the most important contributions of local peoples’ organizations is the implementation of projects and campaigns that will prevent destruction in our communities during disasters. We want to minimize or even achieve zero casualties,” Nalam said.

A fisherfolk organization in San Juan, which is under Nagkaisang Mangingisda ng Hinatuan Federation, is leading efforts to reforest and protect a long stretch of mangrove trees in the area. It is also regulating fishing activities in the mangrove forest.

Nalam narrated that the mangroves shielded them from huge waves when Typhoon “Pablo” struck Mindanao in December 2012. However, the small wharf in the community, which also served as a breakwater, was destroyed.

The mangrove trees’ submerged system of tangled roots serves as habitat for different species of shells, fish and other sea creatures.

“We divided the mangrove forest into sectors and we schedule open seasons for fishing activities in a particular sector. We make sure that a sector is not abused because, before, we have observed that the roots were badly damaged due to abusive fishing practices,” Nalam said.

Maria Liza Baid, who lives a few meters away from the mangrove forest, said the conservation efforts began through a sustainable livelihood program of Women at the Center project of Oxfam and its partner organization, Center for Empowerment and Resource Development Inc. (CERD).

Baid said that it was about time  the women sector participated in ensuring sustainable economic growth and disaster resilience in the village.

“But we also encountered a lot of resistance, most especially from the men. They were asking why we were deciding on the rules in their fishing activities,” she said.

The women in the community patiently explained that in a country where exploitation and unfair gender relations existed, women and children were more vulnerable to abuses, Baid said. “And these vulnerabilities can worsen in times of disasters.”

She said the women wanted to have “a voice and participation,” not just in the decision making but also in the implementation of economic activities and disaster risk reduction programs.

Through assemblies and the painstaking campaign to educate, the whole village now supports moves to protect the mangroves.

“Now, we do not only have a more bountiful catch but we also have a mangrove forest that will protect us against huge waves and storm surges. And the women are very happy, too,” Baid said.

The people also started a communal farm to grow vegetables for consumption and trading in the poblacion.

Baid said the farm aimed to improve on the traditional practice of focusing only on one form of livelihood. “We have to diversify our livelihood if we want to adapt to these changes in the climate.”

“The people should understand that aside from relief operations and orderly evacuations, preventive measures and mechanisms to ensure a sustainable livelihood are very vital,” she said.

When Sendong devastated homes and livelihoods in San Juan,  many people had become almost helpless, they recalled.

Many of the supposed beneficiaries of housing assistance from the national government are still waiting up to now. “The residents … needed something that would immediately provide them with [relief so they could] … rebuild their lives,” CERD project manager Allan Sereno said.

Oxfam initiated a micro-insurance program to provide members of peoples’ organizations with automatic payouts to individuals or families in times of disasters.

Compared to the regular insurance package, the agency said its program guaranteed insurance benefits but with lower premiums as it acknowledged the significance of providing decent and immediate risk protection for the poor.

The claims can be processed in three days and will be immediately deposited to the bank accounts of the policyholders.

In its pilot phase in 2012, Oxfam shouldered for a year the premium for Hinatuan. The residents, local government unit and civil society organizations were urged to negotiate and work out in facilitating the next cycle.

As of March last year, at least 1,992 individuals, including 1,307 women, had been listed as policyholders, coming from at least 10 villages—Loyola, San Juan, Talisay, Cambatong, Port Lamon, Campa, Harip, Baculin, Tidman and Benigno Aquino.

“Now, the people need not worry about money to bury their dead or initial capital to jump-start their livelihood after a disaster,” Baid said. “They will not just sit and weep after a typhoon.”

“We trust the government to give us aid, but this insurance is an assurance that we have something to hold on to,” she said.

With the help of Oxfam, CERD and the municipality, the people of Hinatuan were more confident now in facing potential disasters, Baid said. “We know that our disaster risk reduction mechanisms are not perfect, but we are more confident that damage and casualties will be minimized.”

She added: “We have no option but to adapt. But the experience of Hinatuan will hopefully inspire other places to study the changes in our environment and find ways to adapt to them. We are also hoping that our experience will inspire others to also make efforts in healing our planet.”