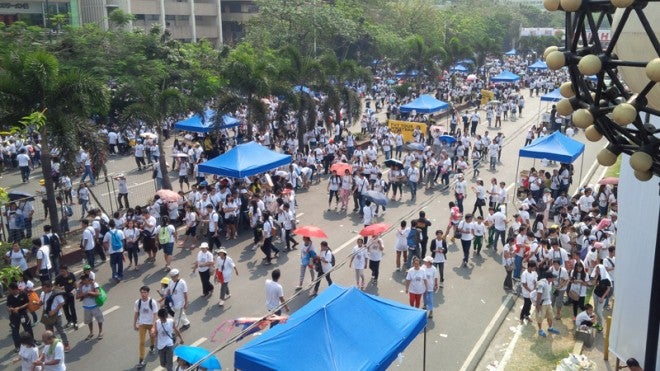 MANILA, Philippines–A representative from the Guinness World Record is set to announce Saturday afternoon if the Iglesia ni Cristo walkathon has successfully ‎beaten the record as the world’s largest charity walk.

Kirstie Bennett, a Guinness adjudicator, flew to the Philippines to administer the tallying of the final crowd estimate of the INC Worldwide Walk for Super Typhoon “Yolanda” victims.

Bro. Edwil Zabala, INC spokesperson for the walkathon, told INQUIRER.net ‎that as of 7:30, the latest crowd estimate of the Manila police stood at 500,000.

But Leo Matignas, an SGV and Co. representative, said the official count as of 11 a.m. is 31,000, relatively lower than the ‎earlier count.

Matignas said they had been facing difficulty in counting the wristbands of participants, which would serve as the gauge in finalizing the official count.

‎Later at 2 p.m., the SGV and Co. will release an unofficial update in the crowd count.

The INC is attempting to break the record of Singapore’s The New Paper Big Walk, which had 77,500 participants in May 2000.