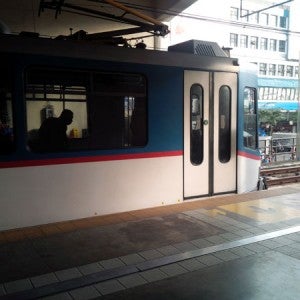 MANILA, Philippines–The former top executive of the Metro Rail Transit Corp. said they offered to provide brand new trains for the capacity expansion of MRT-3, but the Department of Transportation and Communications was insisting on procuring second-hand trains.

Former chairman Robert Sobrepeña said the right of the company to supply the trains under an existing build-lease-transfer agreement remains valid even if they did not reply to the letters of the DOTC seeking second-hand trains.

“As far as I am concerned, I was not in favor of second-hand trains. If we are to put more trains on EDSA, we should put brand new trains,” he testified before Judge Joselito Villarosa of Makati Regional Trial Court, Branch 66.

Sobrepeña said there were several instances that MRTC offered to supply brand new trains at no cost to the government – in 2000, 2004 and 2008.

“We renewed the offer and to also improve the system to allow for new trains to come in,” he said.

Sobrepeña said the DOTC agreed and even formed a technical working team to study the MRTC’s offer.

However, Sobrepeña said the idea of purchasing second hand trains was floated by the DOTC and the House Transportation Committee.

“That did not come from us but from the DOTC. I was not in favor. What we want were brand new trains,” he said.

On the first offer, the DOTC advised them that the government is waiting for a triggering event for the capacity expansion, which is for the ridership to reach 350,000 passengers a day–the maximum for the existing 60 trains of MRT-3.

When the triggering mechanism was reached, MRTC renewed its offer in 2004 but nothing happened despite the creation of a technical committee to study the proposal.

In 2008, the MRTC and the DOTC then agreed to solve the collection issue by arbitration in Singapore.

MRTC earlier accused the transportation department of “creating more traffic and passenger congestion rather than solving them” by entering into a questionable agreement with Dalian.

MRT Holdings spokesman lawyer David Narvasa said the DOTC should focus on ensuring the safety of the MRT-3 coaches instead of insisting on violating the Build-Lease-Transfer agreement.

MRTC has already filed an arbitration case against the DOTC before the Singapore-based International Chamber of Commerce – Court of Arbitration for violating the BLT agreement, which remains valid until 2025.

A capacity expansion report submitted by a proponent of the MRT-3 expansion project noted that Transportation Secretary Joseph Emilio Abaya has already been warned that CNR does not have the track record in the manufacture of light rail vehicles or LRVs.