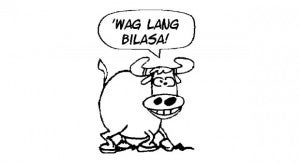 Maybe not, but tilapia may be the only fish that has a breeding behavior similar to man, according to Dr. Westly Rosario, chief of the National Integrated Fisheries Technology Development Center (NIFTDC) here.

“From courtship to taking care of the young, the pattern is almost the same,” Rosario said.

The NIFTDC has been culturing tilapia in the last 15 years and its technicians have been observing their breeding behavior.

A male tilapia starts seeking a mate upon reaching its sexual maturity, by hiding inside a nest that it digs at the bottom of the pond.

“The nest has to be inviting to attract the female tilapia. The better looking the nest, the more females it would be able to attract,” Rosario said.

The male also changes pigmentation (its color) to be attractive to its future mate, similar to a young man dressing to the nines for a date, he said. The extreme parts of its fins turn red, its belly becomes yellow and its whole body color becomes black.

“The tilapia looks like a man wearing a yellow tie with a black suit,” Rosario said.

The female tilapia that catches the sight and scent of the male swims around the nest. But the male drives away a female it does not fancy, Rosario said.

The preferred mate would be allowed to lay eggs in the nest, which the male tilapia would fertilize.

Fertilization is similar to an unconventional human sex act, a detail that has fascinated marine scientists.

The eggs are later incubated in a female tilapia’s mouth. Once the eggs hatch and the fry speed out of its mouth, the female tilapia looks after the young school.

“The female tilapia is a very responsible parent. It is always there, watching its fry to protect them. It would open its mouth to hide them there,” Rosario said.

“Because of this parental task, the female tilapia remains small. And we do not want small tilapia [for food]. This is why we developed a sex reversal procedure in the center,” he said.