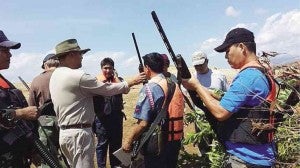 The men had killed 86 ducks using shotguns by the time a group of policemen and soldiers from the Army’s 56th Infantry Battalion caught up with them.

The Pantabangan police said three of the suspects, identified as Romulo Torres Jr. of Quezon City, Wilfred Puzon of Mandaluyong City and Ildefonso Padigos of Bulacan, were with four residents of West Poblacion in the town. The other four suspects have not been identified.

Police said the men could not show their hunting licenses or their permits to carry three sets of 12-gauge shotguns and 118 shotgun cartridges outside their homes.

The men were charged with transporting their licensed weapons without permits and for hunting wildlife inside a protected area without a license.

Junie Fernandez, community environment and natural resources officer for north Nueva Ecija, said the Philippine ducks (scientific name: Anas luzonica) were included in the government’s conservation list. He said the suspects faced up to four years in prison and a fine of up to P300,000 if found guilty.

In a previous report in the Inquirer, officials of Candaba, a town in Pampanga province, raised alarm over the return of hunting in a habitat of migratory waterfowl in the town.

The report, written by Tonette Orejas, quoted Albert Manalili, an animal welfare advocate in Candaba, as saying poachers from Bulacan province had been coming to a village in Candaba, Paligui, to hunt birds.

“They (poachers) are armed with shotguns and panpugo (a bamboo contraption), and they ignore our warnings and advice not to shoot the birds,” Manalili, 54, was quoted as saying in the report.

It also quoted Manalili as saying that despite a national and local ban on bird hunting, the Philippine mallard, or duck, had become a favorite poaching target. 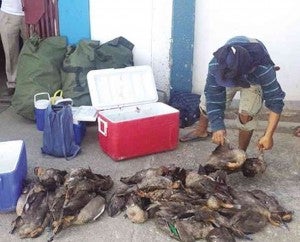 A worker gathers some of the dead ducks that the group of suspected poachers had killed. CONTRIBUTED PHOTO

The Philippine duck, said the previous Inquirer report, is the country’s only endemic duck, according to the Department of Environment and Natural Resources. It is classified as “vulnerable” under the Red List of Threatened Species of the International Union for Conservation of Nature.

Under Republic Act No. 9147, it is illegal to kill or destroy wildlife species except on these conditions: The animals are part of religious rituals, the animal is suffering from an “incurable communicable disease” when the killing is done to “prevent imminent danger to the life or limb of a human being,” and when the animal is killed after its use for “authorized” research or experiment. Armand Galang, Inquirer Central Luzon