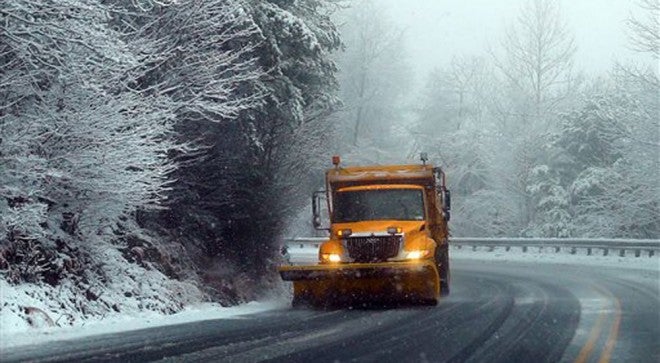 ATLANTA— Forecasters said a potentially “catastrophic” winter storm threatened to bring a thick layer of ice to Georgia and other parts of the normally temperate Southeast, causing widespread power outages that could leave people in the dark for days, just weeks after a storm crippled the region.

President Barack Obama declared an emergency in Georgia, ordering federal agencies to help with the state and local response. Nearly 900 flights were canceled Tuesday at airports in Atlanta, Dallas and Charlotte, North Carolina, according to tracking service FlightAware.

Many people heeded the forecasters’ dire warnings and stayed home and off the roads of metro Atlanta, leaving the city desolate during what is typically a busy morning commute. While only rain fell in the city, up to 3 inches (76 millimeters) of snow fell in the suburbs.

The quiet streets were a stark contrast to the scene just two weeks earlier when downtown roads were jammed with cars, drivers slept overnight in vehicles or abandoned them on highways. Students camped in school gymnasiums.

When asked to elaborate on the “catastrophic” warning, Brian Hoeth, a meteorologist at the service’s southern regional headquarters in Fort Worth, Texas, said forecasters were talking about an ice storm that happens only once every 10 to 20 years for the area. Forecasters predicted crippling snow and ice accumulations as much as three-quarters of an inch (20 millimeters) in area from Atlanta to South Carolina. Wind gusts up to 30 mph (48 kph) could exacerbate problems.

Atlanta has a painful past of being ill-equipped to deal with snowy weather. Despite officials’ promises after a crippling ice storm in 2011, the Jan. 28 storm proved they still had many kinks to work out.

Georgia Governor Nathan Deal indicated Monday that he and other state officials had learned their lesson. Before a drop of freezing rain or snow fell, Deal declared a state of emergency for nearly a third of the state and state employees were told they could stay home. He expanded the declaration Tuesday to more than half the state’s counties.

Schools canceled classes, and Deal urged people who didn’t need to be anywhere to stay off the roads. Tractor-trailer drivers were handed fliers about the weather and a law requiring chains on tires in certain conditions.

The storm hit other parts of the South as well. In Alabama, slick roads were causing wrecks.

The storm stretched as far west as Texas. In North Texas, at least four people died in traffic accidents on icy roads, including a Dallas firefighter responding to an accident who died after falling from an icy highway overpass.

South Carolina, which hasn’t seen a major ice storm in nearly a decade, could get a quarter to three-quarters of an inch (20 millimeters) of ice and as much as 8 inches (200 millimeters) of snow in some areas.

On Monday, the Georgia governor was doing many things differently than he had last month. He opened an emergency operations center and held two news conferences before the storm. In January, Deal and Atlanta Mayor Kasim Reed did not hold their first news conference until hours after highways were jammed.

When the Jan. 28 storm hit, Deal was at an awards luncheon with Reed, who was named a magazine’s 2014 “Georgian of the Year.”

Reed had just tweeted: “Atlanta, we are ready for the snow.”

This time, the mayor made no such predictions. Instead, he said he was in contact with school leaders and the city had 120 pieces of equipment to spread salt and sand and plow snow. The National Guard had 1,400 four-wheeled drive vehicles to help anyone stranded.