Firm in oil spill ordered to do thorough job 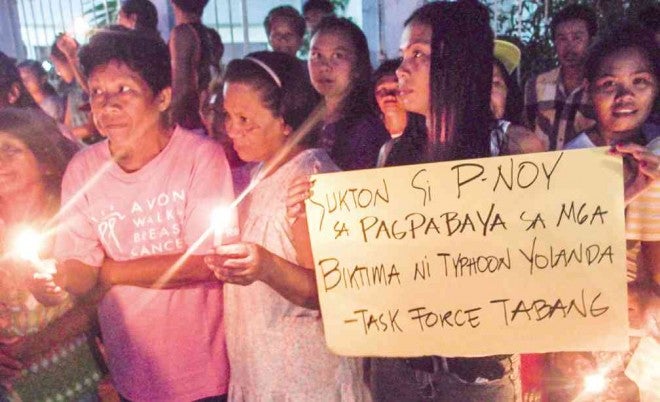 RESIDENTS of Estancia, Iloilo province, hold a candle protest to decry government’s alleged lack of foresight and preparation that the people blamed for the oil spill in their town. NESTOR P. BURGOS/INQUIRER VISAYAS

ILOILO CITY—A multiagency task force monitoring the oil spill in Estancia, Iloilo province, has directed a firm that got an P87-million contract to clean up the spill site to do a thorough job.

“In our inspection of the contaminated areas, we found that some sites that were reported to have been cleaned up still had bunker fuel and oily debris,” said Rex Sadaba, consultant of Power Barge 103 Oil Spill Task Force and manager of the University of the Philippines Visayas Oil Spill Program.

The task force is composed of the Iloilo provincial government and various agencies including the Coast Guard, Department of Health and the private firm Kuan Yu Global Technologies Inc.

It is monitoring the cleanup of bunker fuel from the coastline of Barangay (village) Botongon in Estancia and 11 other villages in the neighboring towns of Batad, San Dionisio and Concepcion.

At least 900,0000 liters of bunker fuel leaked after the National Power Corp. (Napocor)-operated Power Barge 103 slammed against the rocky shores of Botongon last Nov. 8 last year at the height of Supertyphoon “Yolanda.”

The oil spill contaminated coastline and mangrove areas and forced the evacuation of at least 2,000 residents of Botongon on Nov. 23 last year when the presence in the air of the toxic chemical benzene, a component of bunker fuel, reached dangerous levels.

All of the residents, except for a few, had been allowed to return to their homes last Dec. 20.

“We are doing our best to speed up the cleanup,” Young told the Inquirer.

Young said the firm could not set a definite timeframe when the cleanup would be completed but he said it would be “within six months” from Nov. 23 last year when the process started.

Sadaba said the task force was also asking Kuan Yu to remove oil-contaminated debris that had been deposited in a temporary storage facility in the neighboring town of Ajuy.

Valentino Mempin, Kuan Yu operations officer and spokesperson, said the firm was still working on the transfer of the stored debris to a treatment facility in Bacolod City.

A group of residents affected by the oil spill earlier filed a P20.3-million damage suit against Napocor and the Power Sector Assets and Liabilities Management Corporation, which owns the barge, for negligence that led to the oil spill.