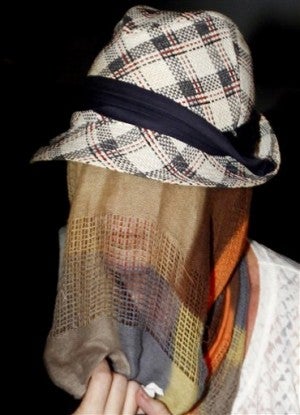 Australian Schapelle Corby, covering her face, listens to an official at the correctional office after she received her parole in Bali, Indonesia, Monday, Feb. 10, 2014. AP

Schapelle Corby walked out of Bali’s Kerobokan prison on Monday with a hat and scarf hiding her face from a waiting media throng. She was whisked away to an expensive Bali resort by Australia’s Seven Network, which media say has offered her as much as three million Australian dollars ($2.7 million) for an exclusive interview.

That’s big money for Australian checkbook journalism and a potential financial windfall for Corby, a 35-year-old who has spent nine years in prison and was studying to be a beautician before her arrest.

On Tuesday an Australian women’s magazine posted online what it says is the first picture of Corby without a mask as she drinks a beer with her half-brother Michael Corby in a hotel room.

Other media have said a Seven interview deal would be worth AU$1.3 million plus expenses, but the network has declined to comment. It did issue a news bulletin that cited a Corby family statement calling the reported sums ridiculous.

“If Schapelle feels that she wants to tell her story to the Australian public, she will do it with someone she trusts,” the statement said.

The statement also said the family planned to sue Seven’s major rival Nine Network over a biopic, “Schapelle,” it aired twice this week.

The telling of her story has already brought the Corby family in conflict with Australia’s Proceeds of Crime Act, which mandates that crime should not pay. In 2007, a court ordered Corby, her sister Mercedes and Mercedes’ Indonesian husband Wayan Widyartha to hand over AU$128,800 they earned from a book and magazine interview deal.

Under the law, Australian courts don’t have to be convinced beyond reasonable doubt that crimes happened. The lesser legal test on the balance of probabilities applies. Australian Federal Police said in a statement “it would not be appropriate to speculate on the likelihood of future legal proceedings.”

Christian Juebner, a Melbourne lawyer who specializes in prosecuting and defending proceeds of crime cases, said it was “highly likely” the AFP would seek a court order to seize the proceeds of any media deal.

“I just can’t image that the AFP will stand by when it’s been so well publicized that she is receiving directly or indirectly the benefit through her notoriety …, without taking a stance, to say: well, people just can’t benefit from their criminal activity,” he said.

Natalie Skead, a University of Western Australia associate professor who wrote her doctorate thesis on Australian proceeds of crime laws, said the fact that Corby had broken Indonesian law and would remain in Indonesia on parole until 2017 did not put her beyond the reach of Australian law.

She expected AFP would seek a seizure ruling but said Corby’s best hope would be to ask a judge for discretion.

“The court can refuse to make a confiscation order if there is some social, cultural or educational value in the product,” Skead said.

Corby maintained that she does not know how 4.2 kilograms of marijuana wound up in her surfboard bag on arrival at Bali’s international airport in 2004 for a family holiday. It led to 20-year sentence for drug trafficking.

Many Australians appeared to believe Corby was innocent at first, though that view became less commonly heard over time. Her case coincided with intense attention in Australia over the 2002 Bali bombings. Many people questioned the fairness of her punishment compared to some of those convicted of minor roles in the terrorism case.

Max Markson, an Australian celebrity manager, said Corby’s story could be worth more than the story of two Australian miners who were paid between AU$2.7 million and AU$3 million in 2006 for telling how they survived for two weeks trapped in a gold mine.

“The miners (story) was the biggest checkbook journalism story in Australia and this would probably be around the same or even more,” he said.

Markson did not see proceeds of crime law as an insurmountable obstacle. “If there’s AU$3 million at stake, they’ll be having lawyers on it,” Markson said.

Indonesia opening up to prison swaps—report