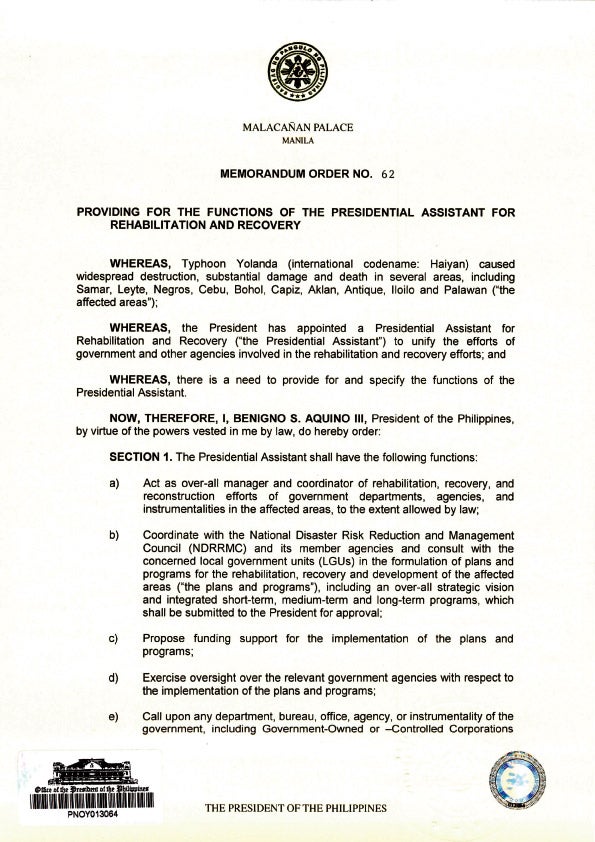 MANILA, Philippines –The Supreme Court on Tuesday has dismissed a bid to stop former Senator Panfilo Lacson from carrying out his work as rehabilitation czar for the victims of Super Typhoon “Yolanda” (Haiyan) but asked him to comment on the petition that sought a temporary restraining order.

The high court’s information chief Theodore Te said: “The Court denied the application for TRO [Temporary Restraining Order] but directed respondent [Lacson] to comment on the petition within 10 days from receipt of the order.”

Lacson’s appointment as presidential assistant for rehabilitation and recovery is contained in Memorandum Order No. 62 signed by President Benigno Aquino III in Dec. 6, 2013.

The petition was filed by Louis Biraogo who claimed that MO 62 violated RA 10121 which created the National Disaster Risk Reduction and Management Council (NDRRMC) for the purpose of carrying out post-disaster rehabilitation programs of the government.

“Hence, there is no need for the new office created by the President which respondent Lacson currently occupies,” Biraogo’s petition stated.

He further argued that MO62 effectively amended RA10121 which is a clear usurpation of legislative power of Congress.