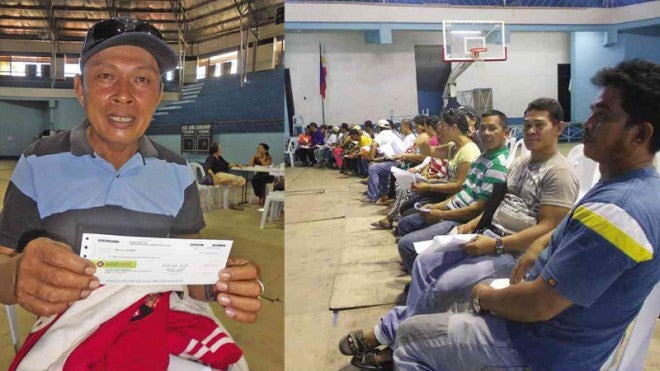 COMPENSATION Rey Lauron (left photo), a military agent during the Marcos dictatorship who is now a police officer, receives a P50,000 check handed out by American lead counsel Robert Swift as compensation for being a human rights victim. Other beneficiaries (right photo) in the Davao region await their turn at the Almendras gym in Davao City. PHOTOS BY GERMELINA LACORTE/INQUIRER MINDANAO

DAVAO CITY—Rey Lauron emerged brimming with delight from a room at   the Almendras gym here last week, showing the P50,000 check to his waiting relatives and friends.

The 51-year-old was among over 400 victims of human rights abuses during the Marcos regime in Davao region who received compensation from a $10-million settlement reached at the federal court of Hawaii with the buyer of the painting of French impressionist Claude Monet, previously owned by former first lady Imelda Marcos.

But unlike most people lining up at the gym, Lauron said he was not really a member of the communist New People’s Army (NPA), armed wing of the Communist Party of the Philippines (CPP), but a spy called a “deep penetration” agent  deployed by Marcos’ military to infiltrate the ranks of the CPP-NPA and sow confusion among the rebel ranks.

Just a few paces away from him, at the next table, a 38-year-old woman was asking why her name was not included on the list when she was also a survivor of martial law. Widowed and without any job, Rowena knew everyone assisting the beneficiaries because she said she had spent time with them in jail as political prisoners.

Rowena, who still broke down when made to recount her story as a rape victim during martial law, did not get a single centavo.

Now a police officer, Lauron said he was mistakenly beaten for three days in police detention after he was caught for being a member of an NPA strike force, known as “sparrow” for its swiftness in carrying out liquidation missions, during martial law in the 1980s.

He said he was known as Blackie, originally Black Panther, in the NPA unit that  was behind the series of assassinations that had earned for Davao City the reputation of “killing fields” at the height of the anti-Marcos resistance in Davao.

The beatings stopped because a certain Colonel Arevalo, his military handler, found out about his arrest, Lauron said.

“He told them (his captors) not to touch me because I was not an enemy,” Lauron recalled. “But I already had bruises all over my body. It was part of the job.”

He said he was proud of what he did and did not bother to hide his identity from the public.

When asked to recount her story as a 14-year-old, Rowena suddenly broke down and cried. Soldiers had arrested and raped her because her parents were known to be NPA leaders. (The Inquirer is not disclosing her real name to protect her and her children.)

Rowena did not receive any compensation because she was not on the original list of 10,000 claimants—the number went down later to 9,539—who filed a class suit against the Marcos estate in 1986, said Betty de Vera, a member of Claimants 1081 who assisted the distribution of the compensation claims to the victims.

“Most of them did not believe such a case would prosper, that’s why, they never bothered to have their names listed,” De Vera said. “Such a case was still unheard of in those days,” she added.

But a new law, called the Human Rights Victims Reparation and Recognition Act of 2013, seeks to grant reparation for human rights violations victims under the regime of then President Ferdinand Marcos.

The class suit against the Marcos estate won a $2-billion judgment from a Hawaii federal court jury in 1995, but disputes over the Marcos property prevented the victims from getting any money until February 2011, when a $10-million settlement was reached over a Texas and Colorado land bought out of Marcos’ money.

The recent distribution came from another court settlement with the British owner of the Monet painting.

Gabriela Rep. Luz Ilagan deemed it urgent for the Aquino administration to create the nine-member claims board to screen and evaluate claimants, and to compensate and give justice to other martial law victims, like Rowena.

“Already a year after the President signed the Compensation Act into law, the claims board has not been created yet,” said Ilagan, referring to a provision of the law.

“Any form of delay would be a double injustice to the victims,” she said. “It took them decades to wait for this and now, they have to wait again?”

Ilagan described the compensation   the survivors received as a small victory for those whose rights were violated during martial law.

“Although there will never be a full compensation because we could never be fully compensated for what we suffered during martial law, for many of those who are sick and those who have grandchildren who are still going to school, the amount will go a long, long way,” she said.