Enrile, Estrada to steer clear of Tuason at Thursday’s hearing 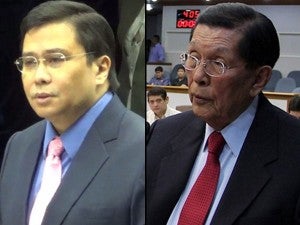 MANILA Philippines—Senate Minority Leader Juan Ponce Enrile and Sen. Jinggoy Estrada aren’t keen on facing off with Ruby Tuason over the pork barrel scandal on Thursday, preferring to meet her in court.

Enrile said he also had doubts that his former chief of staff, Jessica Lucila “Gigi’’ Reyes, had any reason to say anything against him.

“I must admit she’s a casual acquaintance,’’ Enrile said of Tuason, who flew home Friday from the United States to testify that she delivered kickbacks to the senators at the instance of Janet Lim Napoles.

Enrile admitted arranging lunch with Tuason either in late 2006 or early 2007, with Reyes around, to discuss the sale of a piece of property. He said this was the only time he met Tuason.

“I was never given any pork barrel fund. Kickback? I don’t know because I do not live with Mrs. Reyes. I do not live in her house,’’ he said, reacting to Tuason’s claims she brought the kickbacks for him to Reyes.

Enrile, who said he would respond to Tuason’s affidavit in due time, said he would skip again the Blue Ribbon Committee’s hearing on the scandal on Thursday.

“I inhibited myself from the very start. I don’t want to be misunderstood. This is a case, and I have to handle it properly as a case. I am going to face my accuser in the courtroom,’’ Enrile said.

Estrada said he too would inhibit himself from Thursday’s Senate hearing and would face Tuason in court if the Ombusdman decides to take the case to trial by the Sandiganbayan anti-graft court.

“f I face her, and if she lies, do you expect me to cite her in contempt? I can’t do that. And she has immunity. I’d end up the loser,’’ Estrada told reporters. “What for?’’

Like Enrile, Estrada said he would face Tuason in court if the complaint gets there.

Since Estrada could not specify a date for Tuason’s presence in the Senate, he said that Tuason should be asked about this at next Thursday’s hearing hearing. Sen. Teofisto Guingona III, Blue Ribbon Committee chair, took note of this.

“I just want to clear the coast. I’m not guilty. She did not deliver any money to me, in my residence, most specifically in the Senate,’’ Estrada said, referring to Tuason’s claims she delivered the money to him through the basement parking. “I have nothing to hide.’’

He said he never authorized Tuason to handle his PDAF.

Estrada said he believed that “big players’’ in the scam were behind Tuason’s move and wanted her to “limit the case to us.’’

“There are higher-ups who don’t want to be implicated, that’s why we’re being made the sacrificial lambs,’’ he said. He said the media should research on these personalities.