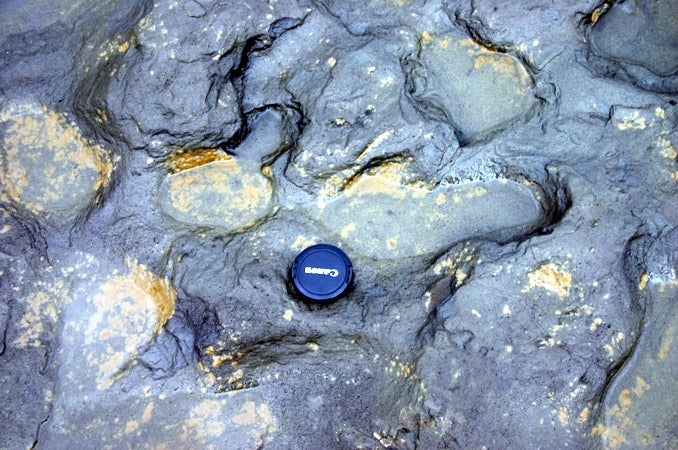 Undated handout photo issued by the British Museum Friday Feb. 7, 2014 of some of the human footprints, thought to be more than 800,000 years old, found in silt on the beach at Happisburgh on the Norfolk coast of England, with a camera lens cap laid beside them to indicate scale. AP

LONDON — They were a British family on a day out — almost a million years ago.

Archaeologists announced Friday that they have discovered human footprints in England that are between 800,000 and 1 million years old — the most ancient found outside Africa, and the earliest evidence of human life in northern Europe.

A team from the British Museum, London’s Natural History Museum and Queen Mary college at the University of London uncovered imprints from up to five individuals in ancient estuary mud at Happisburgh on the country’s eastern coast.

British Museum archaeologist Nick Ashton said the discovery — recounted in detail in the journal PLOS ONE — was “a tangible link to our earliest human relatives.”

Preserved in layers of silt and sand for hundreds of millennia before being exposed by the tide last year, the prints give a vivid glimpse of some of our most ancient ancestors. They were left by a group, including at least two children and one adult male. They could have been be a family foraging on the banks of a river scientists think may be the ancient Thames, beside grasslands where bison, mammoth, hippos and rhinoceros roamed.

University of Southampton archaeology professor Clive Gamble, who was not involved in the project, said the discovery was “tremendously significant.”

“It’s just so tangible,” he said. “This is the closest we’ve got to seeing the people.

“When I heard about it, it was like hearing the first line of (William Blake’s hymn) ‘Jerusalem’ — ‘And did those feet, in ancient time, walk upon England’s mountains green?’ Well, they walked upon its muddy estuary.”

The researchers said the humans who left the footprints may have been related to Homo antecessor, or “pioneer man,” whose fossilized remains have been found in Spain. That species died out about 800,000 years ago.

Ashton said the footprints are between 800,000 — “as a conservative estimate” — and 1 million years old, at least 100,000 years older than scientists’ earlier estimate of the first human habitation in Britain. That’s significant because 700,000 years ago, Britain had a warm, Mediterranean-style climate. The earlier period was much colder, similar to modern-day Scandinavia.

Natural History Museum archaeologist Chris Stringer said that 800,000 or 900,000 years ago Britain was “the edge of the inhabited world.”

“This makes us rethink our feelings about the capacity of these early people, that they were coping with conditions somewhat colder than the present day,” he said.

“Maybe they had cultural adaptations to the cold we hadn’t even thought were possible 900,000 years ago. Did they wear clothing? Did they make shelters, windbreaks and so on? Could they have the use of fire that far back?” he asked.

Scientists dated the footprints by studying their geological position and from nearby fossils of long-extinct animals including mammoth, ancient horse and early vole.

John McNabb, director of the Center for the Archaeology of Human Origins at the University of Southampton — who was not part of the research team — said the use of several lines of evidence meant “the dating is pretty sound.”

Once uncovered, the perishable prints were recorded using sophisticated digital photography to create 3-D images in which it’s possible to discern arches of feet, and even toes.

Isabelle De Groote, a specialist in ancient human remains at Liverpool John Moores University who worked on the find, said that from the pattern of the prints, the group of early humans appeared to be “pottering around,” perhaps foraging for food.

She said it wasn’t too much of a stretch to call it a family.

“These individuals traveling together, it’s likely that they were somehow related,” she said.

Research at Happisburgh will continue, and scientists are hopeful of finding fossilized remains of the ancient humans, or evidence of their living quarters, to build up a fuller picture of their lives.

The footprint find will form part of an exhibition, “Britain: One Million Years of the Human Story,” opening at the Natural History Museum next week.

The footprints themselves, which survived for almost 1 million years, won’t be there. Two weeks after they were uncovered, North Sea tides had washed them away.