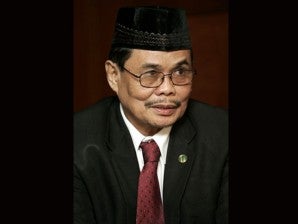 MANILA, Philippines – Leaders of the Senate and the House of Representatives have agreed to pass the  Bangsamoro basic law  before the  year ends,   Senate  President  Franklin  Drilon  announced on Thursday.

Drilon said the agreement was reached after the Senate leadership met with  its counterparts in the House led by Speaker Feliciano Belmonte.

“All of us agreed that the enactment of the Bangsamoro basic law should be made by the end of this year, by the end of December 2014. That is our target…”  the Senate leader  said after  a closed-door meeting  with the Bangsamoro Transition Commission led by Mohagher Iqbal.

“We can try to act on it within the year, if possible… We discussed the Bangsamoro and we agreed to expedite it,” Belmonte told reporters in a separate interview at the House.

During the meeting, Drilon said the  Transition Commission  committed to  submit its first draft of the basic law by March 31.

He said the Senate would then wait for the administration’s version of  the law, which the chamber expects to receive in the first week of May.

Drilon pointed out that the crafting of the law would not require an amendment to the Constitution.

“We emphasize to the Transition Commission that the Bangsamoro Basic Law BL should be within the four corners of the Constitution. That’s the commitment of the President…that there will be no Constitutional amendments necessary,” he said.

The ARMM had been considered a failed experiment by critics especially after the peace pact with the Moro National Liberation Front (MNLF), which created the ARMM law, failed to prevent the MNLF-Nur Misuari faction from continuing the secessionist movement.