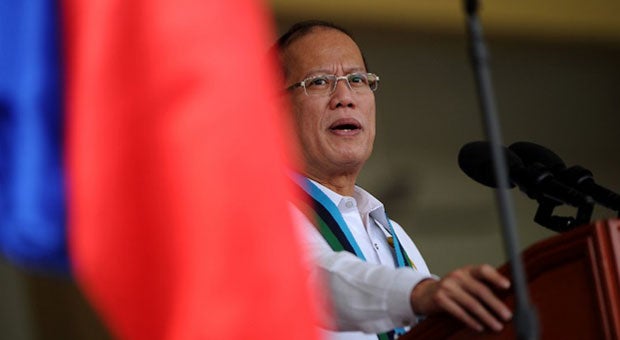 In an interview with the New York Times, Aquino called for world leaders not to make the mistake of appeasing China as it seeks to cement control over contested waters and islands in the strategically vital South China Sea.

“At what point do you say: ‘Enough is enough’? Well, the world has to say it—remember that the Sudetenland was given in an attempt to appease Hitler to prevent World War II,” Aquino told the New York Times in Manila on Tuesday.

Aquino was referring to the failure by Western nations to back Czechoslovakia when Adolf Hitler-led Nazi Germany occupied western parts of the European nation in 1938 ahead of World War II.

Aquino’s comments come less than two weeks after Japanese Prime Minister Shinzo Abe raised the temperature in a parallel territorial dispute with China by appearing to compare Sino-Japanese relations with the run-up to World War I.

Japan and China are at loggerheads over the sovereignty of disputed islands in the East China Sea, raising fears about a military confrontation between Asia’s two biggest economies.

China also claims nearly all of the South China Sea, one of the world’s most important waterways as it is home to vital shipping lanes and is believed to sit atop lucrative deposits of natural resources.

But the Philippines, as well as Vietnam, Malaysia, Brunei and the Taiwan, have overlapping claims to some of the waters, and those disputes have for decades made the South China Sea another potential trigger for military conflict.

China has been steadily increasing its military and coast guard presence in the sea in recent years to assert its claim, causing diplomatic tensions to rise and stoking concerns in the Philippines about perceived Chinese bullying.

The Philippines says Chinese vessels have since 2012 effectively occupied a rich fishing area called Scarborough Shoal, which is about 220 kilometres (135 miles) off its main island but 650 kilometers from the nearest major Chinese land mass.

The Philippines launched legal action with a United Nations tribunal last year, asking it to rule the Chinese South China Sea claim is invalid. China has refused to participate in the UN process.

Anger in China over Nazi comparison

China’s foreign ministry did not immediately react to Aquino’s comments on Nazi Germany but an angry commentary was released on the state-run Xinhua news agency.

“Philippine President Benigno S. Aquino III, who has taken an inflammatory approach while dealing with maritime disputes with China, has never been a great candidate for a wise statesman in the region,” the commentary said.

“But his latest reported attack against China, in which he senselessly compared his northern neighbor to the Nazi Germany, exposed his true colors as an amateurish politician who was ignorant both of history and reality.”

The commentary also insisted China’s claims to the South China Sea were legitimate, and that war references by Aquino and Abe were not warranted.

“Despite lame comparisons by Philippine and Japanese leaders, the international community cannot ignore the fact that China has long chosen a path of peaceful development,” it said.

Aquino warned in the New York Times interview that China may pursue further territorial conquests if it succeeded in taking control of areas also claimed by the Philippines.

“If we say yes to something we believe is wrong now, what guarantee is there that the wrong will not be further exacerbated down the line?” he said.

Later in the interview, he said: “You may have the might, but that does not necessarily make you right.”

Aquino’s media office confirmed on Wednesday the New York Times had correctly reported the president’s comments on the dispute over the South China Sea, which the Philippines calls the West Philippine Sea.

“The president’s statement affirms the country’s position on the importance of upholding the rule of law with respect to resolving territorial claims in the West Philippine Sea,” presidential spokesman Herminio Coloma said.

“It is a principled position that draws from historical lessons, including that which he cited in the interview.”—Karl Malakunas

Palace: Mention of Hitler in sea row not meant to offend China