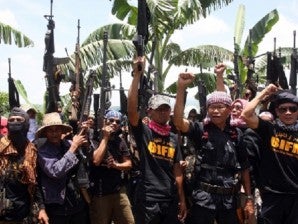 The military believes the leader of the breakaway Bangsamoro Islamic Freedom Fighters, Ameril Umra Kato (in photo), had suffered a stroke and the secessionist group was now under the command of Kato’s right-hand man, Commander Muhaiden Animbang, aka Kagi Karialan. INQUIRER FILE PHOTO

MANILA, Philippines—The military believes the leader of the breakaway Bangsamoro Islamic Freedom Fighters (BIFF), Ameril Umra Kato, had suffered a stroke and the secessionist group was now under the command of Kato’s right-hand man.

Kato remains the BIFF chieftain but his top aide, Commander Muhaiden Animbang, aka Kagi Karialan, who fought in the recent offensives in Maguindanao and North Cotabato, was now issuing the commands, Col. Dickson Hermoso, spokesman of the Army’s 6th Infantry Division, said on Tuesday.

Hermoso said details were scant about Karialan. “But we know he is a hardliner, hardcore. He’s the one leading now. I don’t know his qualifications,” Hermoso told the Inquirer by phone.

“They were able to bring him out right away,” Hermoso said, referring to Kato. Hermoso added that Reina Regente was a huge area that encompassed several villages where the BIFF had established camps, like Ganta and Barangay Bakat.

Hermoso said that Kato was apparently evacuated early on during the offensive that began on Jan. 26.

Hermoso said Kato remained the BIFF leader but “with his health condition—he is already bedridden—he can no longer give commands.”

Hermoso said Kato could not move on his own since suffering a stroke. “It is Karialan who has taken over the older fighter’s duties,” the military officer added.

The military, however, has not been able to lay a hand on either Kato or Karialan.

While Kato and Karialan remain at large, the military said the objective of Operation Darkhorse II had been achieved, which was to dismantle the strongholds of the BIFF.

“We’ve met this objective by being able to capture the camps of the BIFF,” said Lt. Col. Ramon Zagala, Armed Forces of the Philippines public affairs chief.