UN report: Cancer to afflict 3,500 kids in PH every year 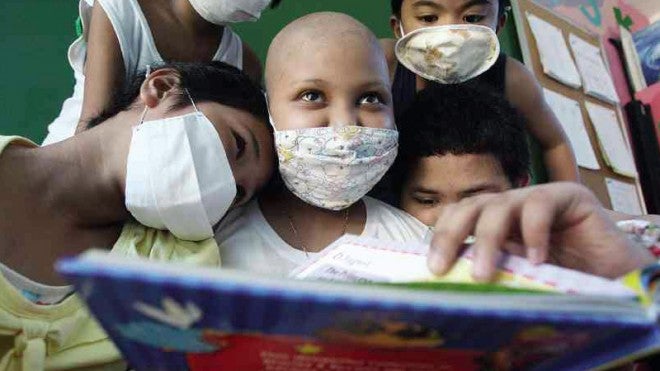 WORLD CANCER DAY. Children read a book at Child Haus in Quezon City, a temporary shelter for poor patients afflicted with cancer. Campaign organizers aim to educate and raise awareness of the public on the prevention and treatment of cancer and at the same time reduce the stigma and dispel the myths about the disease. MARIANNE BERMUDEZ

For Samuel and Marivic Miranda, their world crumbled after their two-year-old daughter, Sabrina Lorraine, was diagnosed with acute lymphocytic leukemia last month.

“We felt devastated but we have no choice but to accept it,” said Samuel, 28, a former overseas worker and native of Camarines Sur province.

According to him, his daughter started showing symptoms of the disease in June.  “She looked pale and had recurring fever. But we never expected that it would be this serious,” Samuel said.

The two-year-old is just one of  many children afflicted with cancer. Dr. Julius Lecciones, executive director of Philippine Children’s Medical Center (PCMC) and country coordinator of My Child Matters Philippines, has observed an increase in the number of cancer cases involving children across the country.

“At PCMC, for instance, there are 506 children actively being treated for cancer with [an increase of] about 30 percent in the number of patient admissions each year, the fastest growing population in the hospital,” he said during a forum Tuesday, which was also World Cancer Day.

His observation jibed with this year’s World Cancer Report conducted by the United Nations’ International Agency for Research on Cancer which said that over 200,000 children develop cancer worldwide each year.

The report projected that in the Philippines, there would be about 3,500 new cases of children being diagnosed with cancer every year. Of the total, 70 percent would be found to be in the late stages of the disease when cure is no longer possible or only through the most aggressive and costly treatment most families could not afford.

According to Lecciones, leukemia—a highly curable disease in children that accounts for about 40 to 60 percent of childhood cancers—is the top killer at PCMC, accounting for more deaths than dengue shock syndrome, sepsis and prematurity combined.

The poorer patients, he said, were the most vulnerable. “About 77 percent of PCMC patients are service patients. Only 34 percent of them are Philhealth members and a significant number are from the provinces. Without financial assistance coming from different sources, many of them will not survive,” he added.

But according to Lecciones, it has been proven that cancer is curable even in resource-poor countries. It is also possible to save 50 to 60 percent of children suffering from easily treatable malignancies using relatively simple and inexpensive drugs and procedures.

“We need to increase the political priority given to cancer by demonstrating that the government’s investment in dealing with its growing cancer problem is an investment in the economic and social wellbeing of Filipinos,” he said.