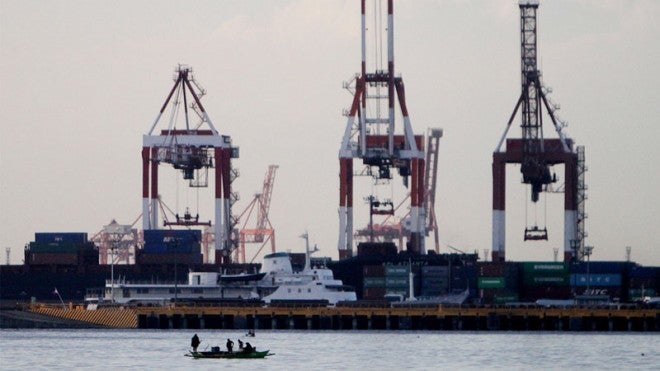 “Illicit funds,” estimated at $410.5 billion, flowed into and out of the Philippines between 1960 and 2011, a significant portion of which occurred through smuggling, said a report published Tuesday by the Washington-based research and advocacy group Global Financial Integrity (GFI) group. INQUIRER FILE PHOTO

MANILA, Philippines—“Illicit funds,” estimated at $410.5 billion, flowed into and out of the Philippines between 1960 and 2011, a significant portion of which occurred through smuggling, said a report published Tuesday by a Washington-based research and advocacy group.

The illicit flow of funds through trade reduced domestic savings, drove the underground economy and facilitated crime, according to the Global Financial Integrity (GFI) group.

“There’s a crisis in this country, as far as the amount of illicit money flowing into and out of the country through the use of trade,” GFI managing director Tom Cardamone told the Inquirer in an interview on Monday. “And that comes down to the ability or inability of the customs department to get on top of this issue.”

The report put the Bureau of Customs (BOC) in its cross hairs, pointing to massive technical smuggling as the main cause of the illicit flow of funds.

Over the 51-year period, the Philippines suffered $132.9 billion in illicit financial outflows from crime, corruption and tax evasion.

Conversely, $277.6 billion was illegally transferred into the country “predominantly through the misinvoicing of trade transactions,” said the report titled “Illicit Financial Flows to and from the Philippines: A Study in Dynamic Situation, 1960-2011.”

Misinvoicing is more commonly known locally as “technical smuggling,” or the underdeclaration of imported goods’ value, quantity or quality in order to reduce customs duties.

Since 1990, it is estimated that misinvoicing has cost the Philippine government at least $23 billion in lost tax revenues.

GFI’s report, funded by Ford Foundation, coincides with the current drive of the Aquino administration to reform the BOC, which ranks as one of the most corrupt agencies in various perception surveys.

On the average, one fourth of the value of all goods imported into the country is underreported to customs officials, the study found.

Of all the illicit inflows into the country, 96 percent were due to outright or technical smuggling.

“Ninety-six percent of these illicit inflows are due to the misinvoicing of trade,” Cardamone said.

“By misinvoicing, we’re talking about misreporting the price, quality or quantity of goods. Customs fraud is another way to discuss it. That’s what it is. It’s essentially misrepresenting what’s in these containers.”

In terms of the illicit outflows, 72 percent of the estimated amount was due to the misinvoicing of goods, while 28 percent was due to corruption. “That’s money coming out of government coffers, basically,” Cardamone said.

The GFI managing director rejected the argument that smuggled goods—which are often sold on the market cheaper than legally imported goods or locally produced goods—were beneficial to price-conscious consumers.

“The problem is that illicit flows facilitate illegal activity,” he said. “It’s used to perpetuate the illegal activities of the underground economy. That’s why it’s a negative to the economy.”

“For the sake of argument, let’s say that [smuggling] keeps prices down. But what you don’t see there—what the consumer doesn’t see—is the tax loss to the government and the [resulting] lack of government services that they might also benefit from,” Cardamone said.

Asked why GFI decided to come up with the report on the Philippines at this time, the official of the research and advocacy group said the country perennially stood out as one jurisdiction with a significant problem in the illicit trade of goods.

“Over the last several years, we’ve done studies on Mexico, Russia and India. For geographic diversity, we picked a nation in the Pacific of Southeast Asia,” Cardamone said.

On behalf of disenfranchised

GFI, he said, was acting on behalf of the country’s underprivileged.

“We feel that the people whose interests are being furthered are the poor people of the Philippines, who are basically disenfranchised because of their economic status and lack of political power, and their inability to ‘game the system’ as so many others do,” Cardamone said.

As for the Aquino administration’s drive to address smuggling, the GFI official said there was “no way to tell” whether recent reform efforts had met with success because the latest data on smuggling the group used were from 2011.

It would take at least two more years to assess the administration’s efforts to combat smuggling, Cardamone said.

“What has this government done to address the problem? Rhetorically, it seems that they’re doing quite a bit,” he said, but added that it was

“unclear if there is a political will” within the customs bureau to implement the planned reforms.

“But with the President’s statement during the State of the [Nation] Address last July, specifically about the customs department, political will seems to be changing for the better to really address this problem in a significant way,” he said.

The GFI official said the country should draw inspiration from South Korea, which started, more or less, at par with the country in the 1960s in terms of corruption and smuggling levels.

Since then, however, South Korea has shown a downward trajectory in terms of corruption, which corresponded with a decline in smuggling activities. The Philippines, on the other hand, exhibited the opposite.

Too early to tell

“Political will is great. Research is great. Informing institutions is great. But it has to be sustained over the long haul, or it looks just like window-dressing,” Cardamone said.

“From where I sit, it’s still too early to tell whether the government has what it takes to reform the bureaucracy to be able to sustain these reforms over the longer period, 5, 10, 20, 30 years, which is what it’s going to take to make the Philippines look like South Korea,” he added.